Glitch in the SystemView game page 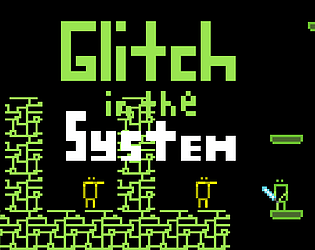 Glitch in the System's itch.io page

Controls
A/D to move, SPACE to jump, and Click to attack

Also I didn't understand the meaning of gray chips (pickups). Can you please explain what they are for?

Currently, they are meaningless. lol I put them in to be part of an upgrade system I still haven't implemented.

I really like the game especially its art, music, controls and produrally generated  maps! The game is very fun.

There were a few bugs though. I got stuck at 7th level because I spawned slightly below the floor so I couldn't move. Also at the end of some level fps dropped very low. I don't know why maybe because there were too many stuff on the screen.

Also some levels were too easy because the green portal spawned near the starting point. It would be cooler if it appeared at the other end.

Thanks for giving it a play! I've added the the bugs you mentioned to my agile board. The generation still needs a bit of work right now. lol Currently, they just spawn randomly in the map alongside everything else.

I really dig the art, and I think you chose good music to go with your style.  You already identified a couple of things that you need to improve, so I know you're headed in the right direction.  This looks like a great start to a fun game.

I liked the art style. Not bad for a first-timer.

Submitted
Save the Princess
LikeReply
kotziSubmitted291 days ago(+1)

Nice work, I like the concept and style. I know it's hard to keep a clear scope on these jams, but I would love to attack and to be attacked by the enemies.

I put together some time today to implement that. :)

I think even with double jump the jump height is pretty low. Also the gravity feels a bit hard to me. There are platforms which you can't reach. I like the concept idea behind it and the enemies that are hunting you. Right now they can complety block your movement, but I guess thats only a problem because the damage implementation isn't finished^^.  I also felt quite lost in the map. Maybe a minimap or some indicators in the level could help to lead the player.

The menu intro transition and music build a great atmosphere!

Overall I think thats a pretty solid game you did :)

I like the ideas, thanks for the feedback. I added your ideas to my agile board. :) I think a mini map would be pretty cool, I have a few ideas on how to possible implement it.

All three of your downloads are just the source code for the game! That's pretty funny but totally unnecessary since you have a working browser version. Please remove them or upload a single zip labelled as the source code to avoid confusion please!

I must've used the build tools incorrectly. Thanks for letting me know. lol

UPDATE: Client builds are now being properly being exported.