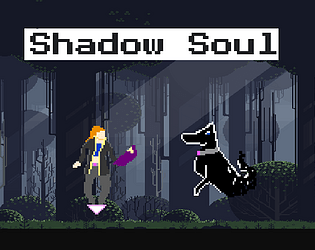 How does your game fit the theme?
We used this theme by having two sprites, the Avatar and the shadow wolf. These sprites were bound by a line renderer, and together made up the full player character. The shadow wolf object was responsible for dealing damage, while the avatar object was responsible for the controls. Similarly the objects were tied together by the story: Our main character was mourning the soul of their pet wolf, when the wolf's soul was stolen away by slime demons. After retrieving the soul, the two are bound together and must fight their way back out to the overworld.

Cool game, I liked the art style! It perhaps would have benefited from more feedback when the player got hit, as I didn't realise how much damage I'd been taking until it was too late. But otherwise I enjoyed it!

Nice idea, though the controls are a bit strange, and the feedbacks slightly unclear. I wonder if the game could use the link between the two characters as a slightly more central combat mechanic.

Pretty good game and fits to the topic. Only graphics may be improved but generally game is cool.

Game was interesting. More indication of when you are being hit would be nice as I never realised I had been hit.

There is a nice array of fighting mechanics and the art is pretty solid. A suggestion I would give is to add platforms so the player can strategically move around to dodge the enemies AND fight them. Great work!

Submitted
No Time For Caution
LikeReply
luwaidevSubmitted1 year ago

Cool game, but could use some more indications of when the player is being hit and what enemies are doing, as I couldn't really tell what was happening sometimes. Cool game and idea though!

There's little to no feedback regarding what's going on.