Help the witch survive this dangerous environment.
Submitted by jolomoju — 3 minutes, 4 seconds before the deadline
Add to collection 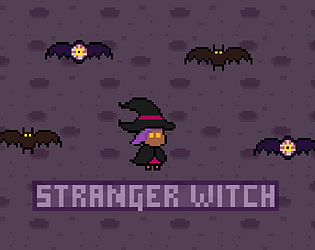 How does your game fit the theme?
The stranger witch has no control over her abilities

It was really fun. I enjoyed it. The music was matching the scene .

Submitted
Not That Way
LikeReply
beanc16Submitted2 years ago (2 edits)

I really like the art for this game. That being said, I had no clue what was happening my first three attempts. There was no in-game tutorial and I figured out the controls just from guessing traditional WASD controls. I was very confused that arrows were used to attack, given that the arrow clicked had no directional impact on the attack itself. Maybe left clicking or spacebar would have made more sense for the attack button given normal genre conventions?

I also was thoroughly convinced that the blue attack only shot out 3 orbs for a few runs which made no sense to me. Then I realized that it shot out 4, one in each direction. I then realized that there was no indication if an attack had hurt an enemy. Because the enemy didn't flash, make noise from being damaged, or have any sort of indication that it was damaged, I assumed all of my attacks just weren't doing anything. If enemies don't instantly die, you need to show that they were damaged somehow, otherwise it can confuse players. This applies for the player character too, I could never tell when I actually lost a heart and when I didn't since there was no visual indication.

I actually never really paid that much attention to anything in the UI. I occasionally glanced up to see what attack was next. But eventually, I just started looking towards the bats and attacking since both attacks would hit anyways despite them being different. So then which attack was next become mostly irrelevant since I never made it past wave 3.

The game needs a lot more visual communication so the player understands what's happening as well as a tutorial. For this game, a tutorial could be as simple as, before the game starts, show WASD and the key that fires the attacks on screen. That's all you'd need for this particular game. Overall, I think the game could be really fun with a little more work. But, you made a game in just 48 hours and that's a tremendous accomplishment. You should be very proud :)

Really fun idea and design are interesting, though I didn't understand how to hit the enemies, because I tried many things and had no clue or maybe I couldn't aimed right. I think it could get more sounds or visual feedback to know if you hit the enemy or when you are getting hit.

Submitted
Out of Boombox
LikeReply
AroN642 years ago

Did the enemy have lots of hp or did all attacks miss everytime? I had only two abilities of which one was almost always useless. There also seemed to be no invincibility frames after getting hit, so I think i lost all of my lives in just a second, because of that. It seems like a game that can have lots of potential, but maybe it needs more than 48 hours.

Hi!  Enemies could resist to 3 hits, but still don't have feedback when get hitted. Unfortunately, I did not had the full time to work on this, but I'm happy that I could delivery something playable in that little time. But I'll surely make an update after the jam to show exactly what I had in my mind and adressing all the feedbacks here.

Thanks for playing and stay tuned for more :)

Tip: As an AZERTY keyboard user the WSAD movement for me was too hard. I'm really not used to that. Better choice for movement would have been the arrow keys and another key for the weapon trigger.

Thank you for the feedback! I was actually unaware of this problem with different types of keyboards. I'll search for some key binding options for my games.

This seems to be an issue for a lot of the games, both in this jam and in general.  (I use the Dvorak keyboard layout, which is even worse for this; I've been switching to QWERTY a lot while rating games here.)  I know that if you're writing the game directly in JavaScript, there's a way to get the position of the key instead of the letter that it types, by using the "code" property of the event rather than "key", but I have no idea if it's possible to access this from Unity (and if it is, it's likely completely different).

(Also, about the game itself, I agree with other comments saying it should give clearer feedback when you hit an enemy.  Also feedback when you get hit that doesn't require you to look up at your hearts would be nice.)

Really love the witch aesthetic here. Your take on the theme was actually pretty similar to ours so I may be biased but I thought this was really fun! Good job :)

The art was super cute and the music went well with it. Like other have commented, some feedback, whether graphic or audio when you hit an enemy would enhance play experience. I liked the random cards for the spells that was a fun and truly fit the "out of control" theme without making me want to rage x). I think you did a wonderful job within the time allowed.  I would appreciate if you could rate ours.

Glad you liked it!! Thanks for playing :D

Fun to play dude, really liked the "out of control" thing in this one. Some games that wanted to fit the theme only were annoying, but this one is not the case. Of course someone mentioned the lack of feedback when your enemies or the player takes a hit, maybe a little sound fx could do the thing. Nicely done! Can you rate ours? Thanks!

Its great how the attacks are "out of control" like the spell list also :P .. Well done!

Thaaanks ^^ There are still other 2 abilities that did not make into this versions but will be in the next update haha. Stay tuned for more!

nice game  i liked the attacks

I really like the color palette of your game

Thanks! It's a part in the process I really like to do :D

I really enjoyed playing!
I missed to fell when I get hit, but this kind of things are totally normal on a 48h jam.
Congrats for the great work! =)

You actually did something very similar to one of the ideas I had for a game (not what we ended up doing)!

I really like the idea of a sort of "Tetris-Hand" for your attacks. There are some obvious things that need to be changed/fixed, but I get it. It's a game jam. That kinda stuff is inevitable.

Some of my notes were:

Spamming spells is the easiest way to go because both spells are just as likely to hit.

Lack of feedback on hits.

Overall still a fun thing and you managed to make a complete game so can't fault ya there!

Congratz on making a game for the jam! Well done!

Wow! This is really helpful. Actually tetris was really an inspiration for the cards part haha. Thanks so much for the feedback!

I love the cute art! The random card mechanic is really creative

Submitted
Out Of CTRL
LikeReply
Anduiln2 years ago(+1)

Really loved this game! The card to indicate what your next attacks were gave you just enough information to let you think ahead, but still kept you on your toes ^^

Good work for a solo developer!

Cute art and great music! I liked the tetris style see what your next attack is mechanic. The blue attack was challenging to hit with! Fun to play and a lot of potential here!

The concept of this game is interesting, but the impact of the player's spells is missing something.

While playing I had no idea if my attacks were even hitting enemies sometimes.

Yes!! I agree. Unfortunately I didn't have enough time to add some effects when spells hits =/

Thanks for feedback! I will make some adjustments after the jam.