After The PitsView game page 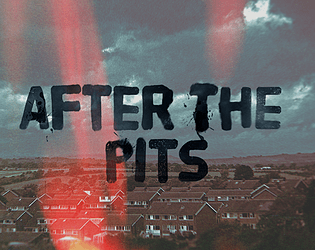 After The Pits's itch.io page

How does your game fit the theme?
Extreme poverty is physically and mentally damaging - it affects your decision-making processes and renders you out of control of your own life.

Very different from other games from the jam, interesting. I quickly got into the mood of exploiting the system as much as possible (there were some clear exploits to use from day 1, making it possible to max out several ressources).
Perhaps allow this kind of thing only in the very first days, like the villagers understand their mistake after you exploited it, and then you have to be smarter and need to exchanges several resources in order to do the same ?

Probably asking too much for a game made in 48h, but after a few days (I stopped at day 8), it felt too repetitive to me. I think I would need a small narrative on top of this (like someone in your family will need quite a lot of meds at day X or else it won't go well ...). Just some kind of longer term objectives, rather than numbers slowly going up.

But for a 48h dev, it's already quite impressive how it feels solid, sets a mood pretty well, and hooked me into your game. Well done !

very cool! a classic example of a game that seems overwhelming at first, then totally understandable, until it all spirals out of control! really great difficulty curve too; at first it's very easy to survive but becomes harder and harder as time progresses. great job!

Amazing concept for a game. It's daunting at first because there's just so much info onscreen, but the controls are intuitive and the whole thing is very well put-together. Wonderful job!

Really loved the game. The feel of it is spot on. Visuals + music really sets the mood.

Gameplay wise it's a relatively classic "trader" type of game, where you have to balance resource trade, while investing in upgrades that will pay out in the long run.

One caveat though is that you can get into this "infinite trade" loops, where a loop of 2 or 3 resource generate infinite resources, in which case all other resources downstream from these resources will also be purchasable that turn and all improvements guaranteed for them too. 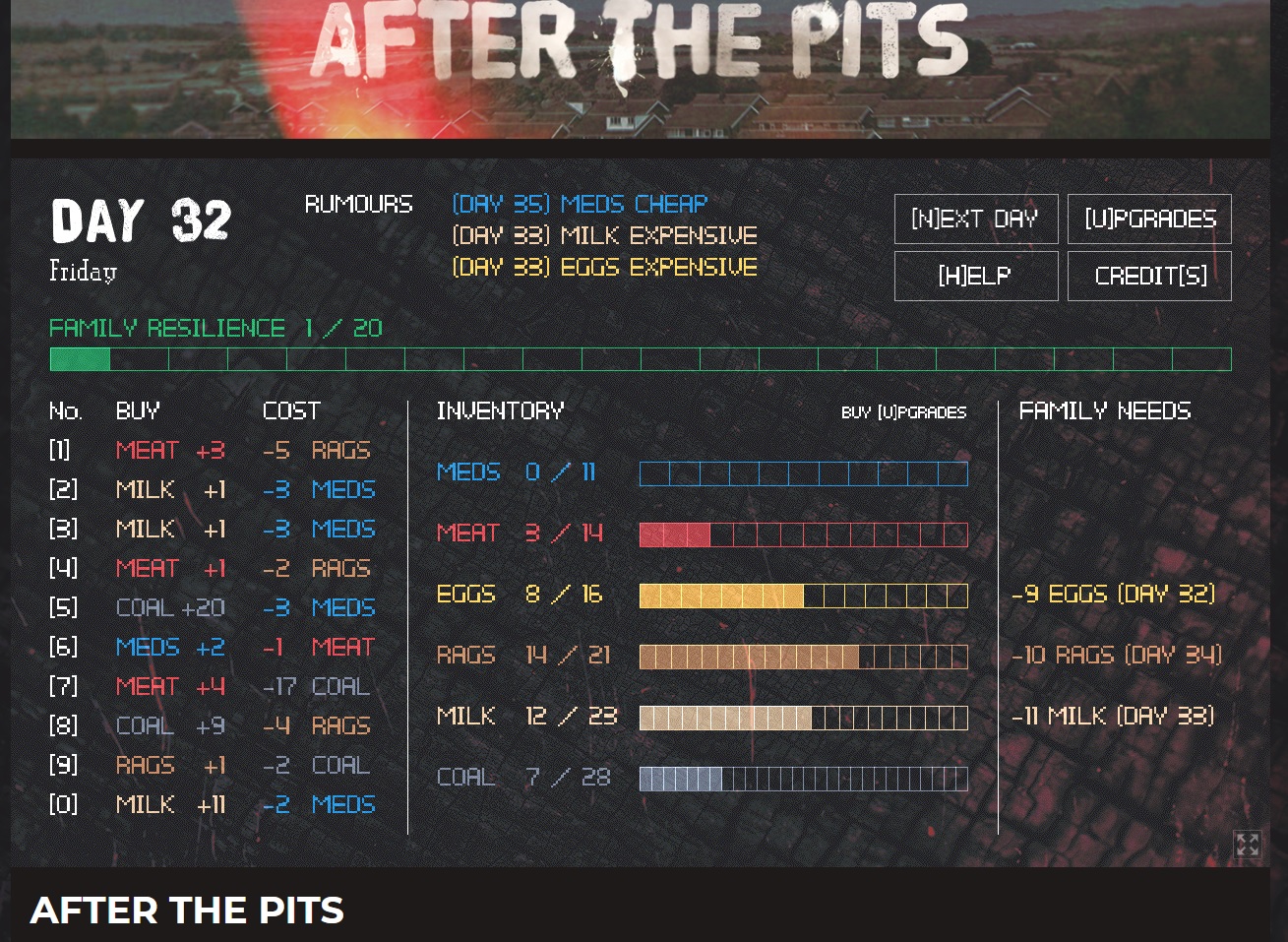 Thanks for playing and I'm glad you enjoyed it!

RE: Your caveat - Yeah this was a mechanic I deliberately built into the game - Yes sometimes they're easy to spot and only need a couple of trades, but sometimes these loops require long chains of trades to work. Each day is like a puzzle to solve - If you can find a loop and execute it you can 'beat the system' for a day by basically exploiting the poor villagers who have priced their goods unwisely. I've capped the maximum benefit you can get from the 'infinite' resources by making it so you can only upgrade your inventories once per day. You might be flush with resources one day, and stricken by scarsity the next - you're trying your best to survive in an unforgiving market that is mostly out of your control ;)

I see. In my 32 days run I had some of the days, like 2 or 3, where I was able to maximize all resources + upgrades, so, I think there's definitely some tweaking to do but I suppose that's not the point of a game jam.

Maybe a tweak could be to prevent "direct loops" where 2 resources obviously create an infinite resource loop between themselves, but again, that's just nitpicking.

Yeah I think that's a good suggestion - probably not too hard to test for either! Thanks for sticking with the game for so long and giving such nice feedback :)

After all the funny games I went through (especially the one I personally made), this one felt so dark and realistic omg. I think the game needs much more help in the beginning and a proper tutorial (I know I'm asking too much from a game in 48 hours, but just a suggestion for a future), because I believe it relied way too much on text. I would glad to receive less information at a time for a longer period rather than dealing with a lot of info at the same time.
But the premise and the execution are solid, liked the concept. Good luck!

Cool, I really like the serious look you accomplished. Felt polished and compelling. I think a click-based interface would've been more intuitive, and it would be cool if, say, you could hover over a deal and preview its effects on your inventory bars (pretending the 48h time limit didn't exist).

Love the appearance and the idea of it o:

Did you manage to build this entire system in 48 hours? What an amazing accomplishment. Great game, you really set up a nice atmosphere in there. The gameplay is a little complex but great after you get the gist of it

I had an idea to make a game based on arbitrage rattling around my brain for a while, but couldn't think of a way of doing it in a way that was easy to grasp (I'm still not sure I've succeeded with this one!) - This Jam's out of control theme lead to me to the semi-fictionalised post-apocalyptic setting I ended up going with, which lead me to the idea of bartering for small amounts of a small palette of goods, which lead me back to the idea of making a profit from a web of lots of small transations. Thanks for playing and I'm glad you enjoyed it!

Wow what an amazing game. You managed to set the mood with the music, the art and visuals! Nicley done!

Hey! Congratulations on your game, I found it quite interesting. As a game with a lot of info, I'd really like to see a polished version with clearer user interface, visuals and user experience (:  I'm a fan of complex games and your's has potential!