Submitted by Zortog — 2 hours, 52 minutes before the deadline
Add to collection 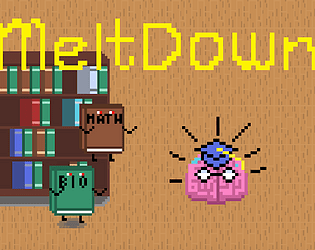 Ranked from 117 ratings. Score is adjusted from raw score by the median number of ratings per game in the jam.

How does your game fit the theme?
Emotional meltdown. Emotions are out of control and switches every so often, changing the mechanics how you play.

Math!  Why did you betray me‽  It's literature and history books that I should be fighting!

At first I didn't understand why I changed my ability but in the end I understood and I liked it. Well done!

Wow what an intresting game!
First of all I like that you run away from books (but why Math & Bio which I like(I know I am weird)) and have to defeat them with the special ability of your current mood. Every mood from being sad and leaving deadly tears to being happy and dash in every book is well made and plays very differently which I like. All of that combined with a nice pixel art style and music makes it very great.

As a suggestion you could maybe add somehing to get a little health back like standing still when in fear (to simulate calming down).

Submitted
Out Of Controls [GMTK GJ 2020]
LikeReply
ToSMasterSubmitted2 years ago

Very cool! I like the art, but one thing: I didn't really see when / how the mood changes, so i sometimes ran into books thinking I was happy, but it switched so I took damage

A nice little game, the audio and visuals were pretty well done, and I liked how unique each attack was. Honestly I dont really have anything to nitpick on, so great entry!

Very cool, i had some lag but that's just me.

I like how each emotion is so unique in the way it sounds, looks, and moves. Each ability is so fun too. Going from invincible to completely vulnerable kept me on my toes. Great game overall.

Great game! I really liked the variety of the different states and that the changes create almost completely different styles of gameplay. I do think that it might be a little better if the running away states happened a little less often. But overall great game!

What a cute concept! I like how well the different states flow between each other so that it still feels good to play no matter what state you're in. Very replayable too!

Pretty fun little game! Some details could be improved, such as an indicator of when the state change occurs. Also, books moving through obstacles feels a little bit unfair IMO.

Fun game! I think some sort of indicator to show when your about to switch modes would be helpful.

Great entry :D loved how math books are your enemy

Really nice game idea, the different skills are really unpredictable so you have to adapt to defeat the books.

Nice game ! The different powers are great, forcing you to adapt your playstyle for each of them. A little indication for when the emotion changes could have been great, but overall a solid game ! Well done !

Very nice, the concept was cool and it was executed very well. The art is cute as well :)

Submitted
The Chickens Are Out Of Control!
LikeReply
DrMoo42Submitted2 years ago

Nicely put together. As other have pointed out a cue for when the mode is about to switch would be appreciated. in addition it's pretty easy to get surrounded when in cry mode, which can lead to somewhat unavoidable hits.

I like the game, but its nice to see the addition of newer textbooks, and powers. It would also be nice to have a cue as to when powers will be switched soon. An instructions page could be included to have the menu screen neater, or rather a demonstration of how the powers work, instead of the instructions. Overall a great game, I had a great laugh burning the math textbooks, and best of luck in the GMTK game jam! 9/10, would fail math again!

This is an incredible game! The movement felt amazing, the art was good, and the different emotions were cool.

Very cool! I especially enjoyed the art and the way that the gameplay is always switching up. Nicely done!