Save your ship from doom
Submitted by Gemini Taurus (@_antonomase) — 8 hours, 21 minutes before the deadline
Add to collection 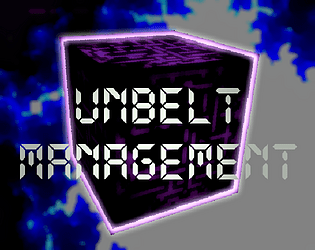 How does your game fit the theme?
A simulation game where the camera is "out of control"

This is a super original idea, and a creative take on the prompt. The different ship components were nicely distinct and clearly communicated their gameplay function. Your focus on buttons was good, because I think anything else would have been too difficult to control at the rapid pace required. Your tutorial level was a very clear way of communicating the rules. Art was very clear and functional, and the adaptive music was a nice touch.

Your attempt to streamline the controls lead to confusion in some areas (the sliders and wheel took some getting used to). A pause button with the ability to go to the main menu would have been really nice, given that I ended up losing intentionally to get to harder difficulties. I think the most noticeable thing is that difficulty scaling based on levels is really hard to do with the concept you created; the way it is right now, the harder levels felt basically unwinnable because you can't navigate to enough panels. Maybe instead of increasing the amount of error caused by each component, increase the number of components? Or turn it into an endless single level with escalating difficulty? I'm honestly not sure about the best solution.

This game feels criminally underviewed given the creative concept and effective, cohesive execution. It was very fun to play, even if the later levels felt unfairly hard (I can't imagine making 60 seconds on nightmare mode). Well done!

Thanks for your honest and complete feedback! The wheel and sliders were the hardest thing to make since when you click on them you need to keep your mouse over it all the time. And for the difficulties, there were added the last hours, meaning that I couldn't change much between them. I wanted to change the camera speed and rate at thing are disrupted  but my system couldn't endure that ( bad coding for the most part). For the game mode with escalating difficulty, it the thing you unlock with nightmare mode. And thanks again for you rating my game and leaving a so constructive comment!

Really cool take and great submission overall! Hard a time with the getting the wheel straight & some of the harder difficulties (couldn't really understand what was causing the error rate to rapidly climb). It certainly nails the theme!

Thanks for playing the game! The difficulties were really hard to figure out (and I kinda failed to do something really interesting for them) because I wanted to change the camera speed and other parameters, but the way I coded stuff made that only one thing could be changed for each level. And it was the " error multiplier", that changes how much things weighted for the error calculation. Next time, if I do an arcade game, I'll try to make each mode really stand out!

Cool game! I think it's a really unique idea and I like how frantic it can get with trying to click on multiple things at once. The camera angle was pretty creative too, I have pretty bad motion sickness but it was cool while I could play it ;)

I also think the adaptive music with the higher error is really interesting! Good work.

Submitted
Pie on the Fly
LikeReply
Gemini TaurusDeveloper2 years ago(+1)

Thank you for your feedback! Motion sickness was my biggest concern during development and I tried to minimize it as much as possible. But in a game where you don't control the camera, it's almost impossible to remove the motion sickness.

I didn't mark you down for the camera motion, I really enjoyed it! I just have a weak stomach so I couldn't play long :)

I really enjoyed your game and I thought it was a creative take on the game. Could I ask you to check out my game as well? :)

Yeah, I'll take some time to check out your game!

Nice work. After a while the moving becomes a bit much for me but it was fun to play!

The visuals are really nice and I liked the effect of speeding up music as the error increases. Had no issues and fun time playing it!

What a cool game, it simple but i really like the style of the game!

your game is awesome!

Submitted
Out of Earshot
LikeReply
Gemini TaurusDeveloper2 years ago(+1)

Wow, this is pretty amazing. You managed to simulate the out_of_control feeling we get in dreams. 5/5 on all fronts, I have no complaints, great Anxiety Inducer

Well thank you so much, I'm glad you had a good time with my game!