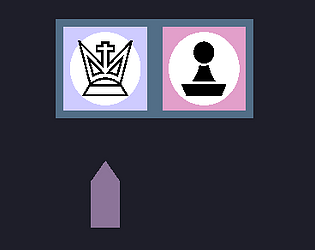 Nice game! It's interesting to find that someone else had a similar idea to mine, though yours is much more a full game at this point. Also I found a bug where pieces sometimes disappear when you move them. Makes cheating possible, but a lot of times it was the king so I just had to start over, heh.

Haha, I was wondering if someone would come up with a similar concept and here we are!

Do you know how to reproduce the bug? I don't think anybody reported this issue before.

Anyway, thanks for feedback, see you on the next GMTK jam!

dang, that was really clever how you used the mechanics of chess to make a puzzle game! It's really simple, but I liked the progression of ideas and constraints in it

Cool idea, really recontextualises how you have to think about each chess piece. Looking forwards to seeing here this goes!

Its a great game. I just find that the puzzles arent too challenging. Definitly one of the better games though.

Thanks for feedback! I'm torn on the difficulty, some people said it's very challenging ^^. I'd definitely  include more and harder levels if I had time though!

What a great game! Well, I guess I might be a little biased, since I too made a chess inspired game. Though I don't think I am. This really is a great game.

Original combination of chess and puzzle :)

The concept is great, I really like the puzzles.
I'm blocked at level Towering Over.

A really fun and creative game. I would love to play this on my phone while on bus rides or just waiting around.

Submitted
Only You
LikeReply
Did'Submitted174 days ago(+1)

Wow, nice, and there are plenty of levels too!

The idea is really interesting and could give way to good puzzles!

Some random comments (but I still love the game):

I thought it odd that I destroyed all the black pieces and kept my king and knight, but it wasn't a victory. I had to get my knight killed for the level to complete.

At another point, I finished the level with one black knight still standing (on the left of the king).

The end goal should be clearer. I saw later than the goal was for the king to go right. Maybe the king should automatically go to the right position when all enemies are defeated, so the player can understand the goal more easily.

A lot of puzzles can be brute-forced. Maybe there should be more constraints on some movements, like towers must eat a black piece if they go toward it. Otherwise, it's so easy to manipulate them.

Some puzzles are way harder than others. The second one for instance really asks you to think more than others.

Submitted
Only One 1
LikeReply
SilvarcDeveloper174 days ago(+1)

Hey, thanks for feedback I'm glad you enjoyed it!

I know I wasn't clear enough when it comes to the goal (hence I wrote it in the description later). I hoped the animation would convey win condition good enough but turns out there is much to be done in the tutorial area.
As for difficulty scaling and level design, I was running out of time and as a result some levels are much less polished than others.
Brute-forcing levels could be disincentivised by rewarding the player for solving levels with as few moves as possible. If I had had more time (or better planning) I would have certainly added that as well as more levels, better level design, and maybe an Undo button.

i like this game for allowing brute force. i am free to experiment casually and learn the mechanics at my own pace (especially when lots of steps are reversible.

perhaps a leaderboard of steps used will only be shown before you start a cleared level?

Oh, of course! I didn't specify how I would want to reward the player and a leaderboard is certainly a great way to do that! Although even simple thresholds of moves could be enough (ex. granting a star(?) for fewer than 20, 15, 12 moves). This would also give the game some replayability.

for the king / knight scenario, the game should show a stalemate message stating that the king has no moves since no black piece is present to advance the turns.

it means we have to take care for black pieces too, and may even spare their lives

Absolutely great! I think it would be nice if the premise were more clearly explained in the start, but other than that, a real pleasure to play!

This is a really awesome game. I was very confused about the rules at first, but after I read the rules I had a really good time. Very challenging puzzles. An in-game tutorial and some feedback that tells you that you need to restart would have made it perfect.

Great design! Managed to beat it and enjoyed myself very much. The quips were a nice touch as well.

In many cases I could ignore any sort of clever sequence and just line up stuff to be captured by the king one by one, by moving some piece back and forth, essentially "pausing" that color. But there were definitely a bunch of really satisfying moments.

Thanks for playing, I'm glad you liked it!

Yes, I was aware of the moving back and forth strategy. It would've been less of a problem if I had either better planned some of the puzzles or included some sort of incentive for winning as fast as you can (like a turn limit or reward for minimal amount of moves). Unfortunately I was out of time so I had to submit - I would love to include more and better thought out levels.