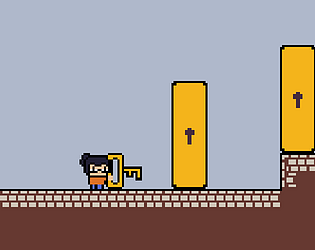 Concept and additional apples are great!

Submitted
The real one.
LikeReply
MaytchSubmitted1 year ago(+1)

I appreciate the optional challenge of getting the apples!

I really liked this game! The puzzles were challenging, but unlike others I didn't think the difficulty spike was too bad. I did, however, spend ten minutes on the last level thinking it was impossible until I learned that the door you unlocked doesn't lock back up after you hit a lever. All in all, This was a pretty good game. Great job!

Submitted
Roll With It!
LikeReply
kypelloSubmitted1 year ago(+1)

Really clever mechanic and well-designed puzzles. The new mechanics are all introduced well.

The controls are pretty uncomfortable. I think if it was A and D to move, W to jump, and Space to grab it would play much better.

I also like how there are apples to collect. After I collected all of them and jumped to the top of the screen at the end it crashed however,

This clever! I love the concept of a puzzle platformer. Everything is well executed, except for the difficulty. For my taste the game is very challenging, if not quite hard. But this is just balancing of movement and level progression.

How ever this game is nice! Keep it up!

A fun game, and I absolutely love the concept. It has a lot of potential, and I think that if you worked on it some more and addressed some of the issues this could be released as a full game! So as others pointed out the increase in difficulty was very sudden and I had a hard time understanding what I had to do. Also the fact that there is no introduction to the later parts of the game had me guessing what would happen. Other than that though I liked the extra challenge of the apple, and the controls and pixel art style really fit the game well. If you fix the difficulty curve and add some more sound effect, brighter graphics, and background music, this could definitely be a commercial game! Well done, you earned a very high rating from me and I hope you get featured in the video! Good luck! :D

Also I would really appreciate it if you would check out my jam entry, Sheepherd Dog. Thanks in advance! :)

Thank you for the feedback! I enjoyed playing your game as well :)

I really liked your game. The idea is somewhat similar to mine but you did it in 2D with gravity and jumps. Nice level and puzzle design, I really enjoyed playing it.

Thank you, I really liked your game as well :)

Really cool game, especially the level design, i really liked the difficulty of collecting all the apples.

Submitted
One Platform At a Time
LikeReply
stampede247Submitted1 year ago(+1)

This game is pretty cute and finished feeling. I love the prize for opening the golden heart at the end. It get's pretty hard quick but there's only line 6 or 7 levels or something so that's fine imo. I think the one key adherence to the theme was good and straightforward but nothing too special. Worth playing if you want a short puzzle platforming experience.

Personally I quite liked the design of your game but found the sudden increase in difficulty a little too much for my tastes. All in all, interesting concept though :)

Thank you! And thank you for the feedback about the difficulty, I'll take that into account the next time I design puzzle levels :)