One Gas to PassView game page

Find your window to break wind
Submitted by coleandress (@colegamedesign), BirdBoss — 3 hours, 7 minutes before the deadline
Add to collection 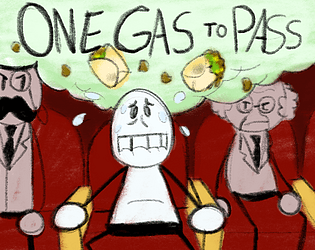 One Gas to Pass's itch.io page

Hilarious. Concept, art style, and sound design all came together really well. Where I can I download this version of Africa?

Submitted
You Can Only Jump Once
LikeReply
coleandressDeveloper1 year ago

Limited to only live performances only, sorry :P

We've all been there in one form or another. lol This is proof that a game does not need to have next gen graphics or complex story telling or in depth mechanics to be enjoyed. Thank you! :P

Thanks for playing and for the kind words!  We wanted to make something low stress and fun.  We're glad you enjoyed it :)

While I'd love to say I'm above fart humour, one fact remains true, farts are hilarious!

The game itself was incredibly entertaining, with a somewhat almost janky style which really endeared me the the project. It was simple and incredibly easy to understand and because I'm secretly a 4 year old, I constantly laughed throughout.

I have no idea if the audio was intentionally performed in that style or if its a serious best effort, but either way, it strongly complimented the gameplay and visual style in a way that frankly made this game a perfect few minutes experience.

One minor thing that could potentially be changed, is that the audience, performer and environment has zero reaction to a failed attempt. The player character does react (in an amazing way I might add), but it would be nice to see other reactions from around the room, so that it didn't seem like the player existed in a bubble.

Thanks for playing and thanks for the feedback!  We debated for awhile on how to handle the music but in the end I felt it'd be more fun to record horrible renditions of a few different songs.

The audience reacting would definitely make the scenario feel more alive.  We'll keep that in mind for future projects :)

Very original and has the goddamn best soundtrack I've heard in any game, it almost looks like it was recorded at 3 AM and didn't want do wake up anyone.

I too miss the rains down in Africa.

Some of the songs may or may not have been recorded very late :D

Your game was simple, but cute and definitely had the entertainment factor haha. Hearing your rendition of the various songs gave me a good chuckle. :)
If you'd mind checking out our game, i'd be very grateful. :)

Thanks for playing!  We'll check out your game :)

Submitted
Difference of one
LikeReply