Submitted by Planschi — 3 hours, 53 minutes before the deadline
Add to collection 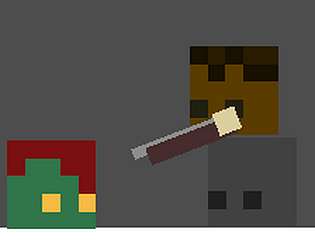 Nice job! At first I didn't understand why you would spawn the player on lava? But then I quickly realize you can use the corpse to jump on them. Really clever design. There are also puzzle element and the player would have to choose when to use their only bullet.

Nice game. It took me some time to realize that the gray cube are my dead bodies. However, the levels teach the mechanics nicely, so by the end, I understood how everything works. Well done.

I like the idea of your death having consequences for the next attempt. However having only one bullet doesn't feel like it adds anything to the game. It just adds a frustrating factor where sometimes you are left with no choice but to kill yourself.

Despite the minor bugs, the game is pretty fun and playable! The idea of a platformer zombie game where the main goal is not to shoot the zombies, but rather to turn them into blocks that allow you to move on, is an interesting concept. But you can also suicide and turn yourself into a block and you can turn yourself into a zombie by colliding with the zombies. All of that you can do in one turn, each time spawning as a new character. Very clever and yet simple idea, I see the potential here. Well done!

I love this concept. This has potential to become something really cool. The whole thing was abit short and lacked of more complicated puzzles this mechanic offers. But Nontheless: Keep on working on this. I'm looking forward how this might develop :) The core concept is genius

Submitted
Meet Me in The Shadows
LikeReply
PlanschiDeveloper1 year ago

Thank you ! Yes I had plenty of mechanics and level concepts but only gamejam time :D I will look into it to develop it further

Wow this game is a really clever concept , having to use past versions of yourself in order to do platforming, and having to figure out whether you want to use up your life to help the future you or use your bullet to kill an enemy. Please make more levels for this!

Haha thank you! I will try to improve and add stuff to it =)

I really like the idea of turning into a zombie. Fun game :)

Submitted
Only One Minute Again
LikeReply
MaytchSubmitted1 year ago(+1)

Cool idea, fits the concept well. I think it could do with having more room to see though!

Nice game, I enjoyed playing it. Wish there were more levels but due to the game jam I'm not surprised there wasn't more levels :D

Yeah, that is the same for everyone though :D

Really interesting concept! I liked the only one ammo constaint that makes you choose between killing other or suicide which can be both useful and leads to interesting choices but I found the one minute rule unecessary. Overall, it's a cool jam game! Congrats!

Thank you for your feedback! Yes the 1min rule was in these levels not so important perhabs I can improve something

I had fun with it. I like the idea that your failures can cause trouble for you in the future making each move a little more dangerous. Having a little more screen space would help with planning and make it easier to play although at the same time not knowing everything ahead is also fun. The suicide mechanic was a little dark but mechanically I think it worked well as a puzzle tool. I think you could really run with this if you keep working at it.

Thank you for your comment ! Yes its dark thats why I come up with zombies so suiciding seams legit ^^

The concept is really very interesting, the fact that you have to die and then you can continue the level. The little sound effects are wtf but nice. I think the camera should be a little readjusted. It's a good little game ^_^

thank you! Yes I just put the camera as a child to the player sry for that xD

Really fun! I think the connection to the theme could have been a bit stronger, but it is well designed, very original and explains it's mechanics pretty well through gameplay. Well done!

Awesome you noticed ! I really tried to explain through gameplay! =)

Interesting. Kind of reminds me of an old flash game where your previous attempts would still appear and you could interact with them. I feel like this game has a tendency of having mistakes compound and make the level much more difficult than it needs to be, largely due to the "one bullet" thing. It also doesn't help that there are a few "leaps of faith" where you can't see the zombie below. Otherwise, I though it was great.

Cool idea and design. I like it. A bit short but that's OK.

Thx! Yes planned some more levels but I had not enough time to put them together

This is a really cool idea! I actually spent a lot of time playing this. It would be nice to have an ingame timer that continues throughout all of the levels so we can see how fast we go. Also, more levels would be nice. Can't wait to see what this game becomes! Also, made a fun speedrun, haha: https://www.youtube.com/watch?v=N0NQ4-iWrhM

haha nice thank you for making a video :D

Great game! I would love to see this continued after the jam with more levels

^^ I have to consider that!

The design of the zombies is on point :)