Play as Io as you unravel the mystery of the quaking sewers in this RPG with only one stat!
Submitted by goneep — 8 hours, 13 minutes before the deadline
Add to collection 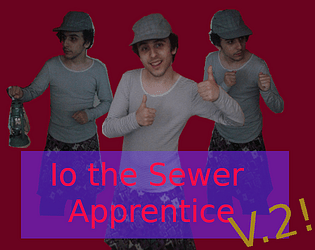 I can't beat the boss for the life of me. Maybe I chose the wrong options... A great game nontheless! Please make a sequel. I am off to replay and get better moves!

Genuinely not sure what just happened... did enjoy it though.

I don't think there is any other scenario in the world where I can say "I'm bad at math so I just punched my way to Elon Musk". The humour is definitely the selling point and the one stat soul system surprisingly made the RPG experience very pleasantly relaxing, except for the maths.

Congrats on getting to the end of the game despite its mathematical mechanics!

I had to play it twice, since I didn't manage to beat Boss the first time. Did it the second time cause I picked moves that were more useful in that fight.

I really like this game from how silly it is to how interesting and good the one stat combat turned out to be. (Except for certain movesets against Boss)

Also: Does Ultrasound only work when your SOUL is divisible by 3 and your opponents SOUL is even?

Wow, I'm glad you liked the game enough to give it a second try!

I'm gonna try and change the way the Boss fight works so that you can beat it with any move-set. Ideally in a way so that it remains about as hard to beat.

As for Ultrasound: Yep, you're correct!

Love it, just the right amount of silliness and humor. And the skill-acquiring mechanic is really good.

Submitted
Only One (Color Is Safe)
LikeReply
goneepDeveloper1 year ago

I'm happy you liked the game!

I indeed am impressed by all those entries so far, especially this one. What the hell did I just played? Hahaha, you're amazing. Thanks for existing, I guess!

Thank YOU for existing! :D

Beated the entire game and I demand a sequel in this very style! It is just brilliant. Amazing job!

Submitted
The One Technique
LikeReply
goneepDeveloper1 year ago

I am thinking of doing a little more with this game. It was definitely very fun to make!

I'm happy you liked it! Thanks for playing!

That was a super fun experience, I ended up winning by appropriating myself Elon Musk's work, and then BONKING him like a rat would.

A very effective strategy indeed... Thank you for playing!

I love this it's so weird and fun

Submitted
When All You Have Is
LikeReply
goneepDeveloper1 year ago

Thank you your game is weird and fun too! By the power of pixabay.com!

Entertaining and strange. I really enjoyed it until I got to the boss. At that one I had accumulated soul building moves enough for this to happen. 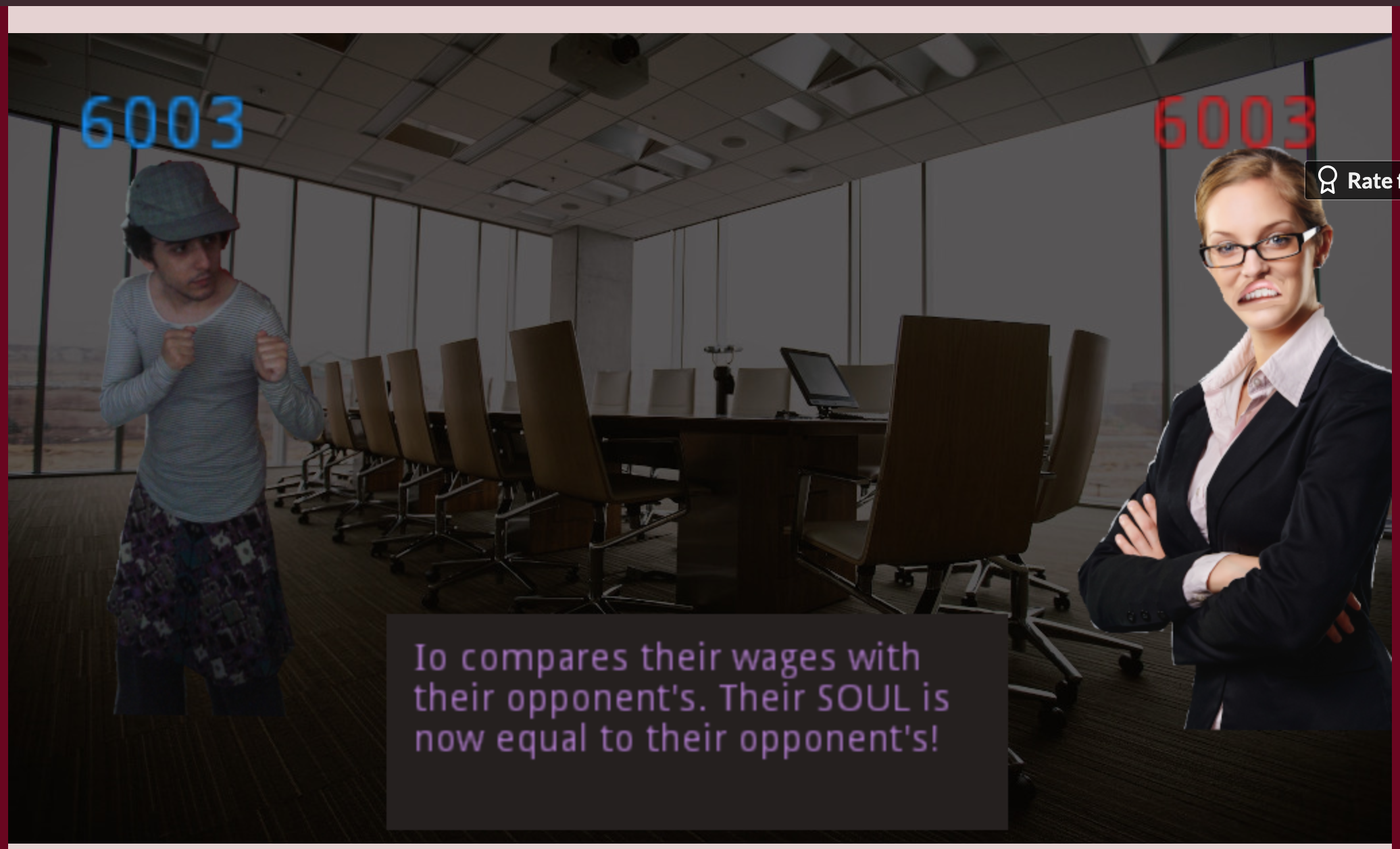 Oof yeah that's bad :D I just tried playing the game and only picking moves that gain you soul and yeah, beating the boss isn't really feasible this way since the trick is you need to keep your soul somewhat low so... this... doesn't happen.

Anyway, once the jam is done I will definitely update the boss so that it accommodates the soul gaining lifestyle! :p

Glad you liked the rest of the game anyway! Thank you for playing it until that unfortunate point!

What a shame, you weren't that far from the end !

That was certainly an interesting experience.

The game caught me off guard with the different and off collar looking visuals and writing and got a few genuine laughs out of me, however while I was playing, I couldn't help but think of the reasons why RPGs usually have more than one stat.

Good effort, but needed a little more time at the design stage in my opinion.

Glad you got something out of the experience! Thank you for playing!

As a person who took part in the creation of the game, I love this game objectively. (I took the pictures)

Honestly, I expected nothing when launching the game, then I got a great game with a really well designed combat mechanics and a nice sense of humor! Oh, and those photo (of you?) are great.

Thanks for making that game !

A thing that would have been nice, is to see what effect the attack does, like when hovering an attack with the mouse you get the description.

I'm glad you liked it! Yep, those are photos of me, taken by my boyfriend who is thankfully good at taking portraits!

And yeah, hovering info on the moves is definitely something I would add if I had more time, along with showing the amount of SOUL a character is gaining or losing during a move.

Nicely done. The game works as it should and it had a great sense of humor, which is nice. More in-depth review coming:

Design [4/5]: I liked that it was an RPG that only focused on one stat: SOUL. It keeps things simple, but the gameplay is still varied and your character is still customizable since you can learn one of your opponen'ts moves at the end of every encounter. That's a really cool idea. Having said that, I think there are some drawbacks to this approach. Considering you don't have an "attack" or "strength" stat in this game, the only way to get a stronger attack is to defeat an opponent with a stronger attack. However, that's the problem: your opponent will be far stronger than you at one point. There are a few ways this problem could be solved, but I think all the solutions come with other drawbacks. One idea would be to simply give the player lots of health, but that would make you too overpowered. Another idea would be to have enemy encounters scale linearly in difficulty. However, that would just get predictable and boring after the pattern sinks in. I think the aesthetic and narrative design of this game goes a long way in motivating players to continue through the encounters. I was trying to figure out how many points to rate for design. I decided on 4/5 because I think this game is a really interesting game design experiment in what happens when you have an RPG with only one stat, and I really like the mechanic of taking one of your opponent's moves at the end of each encounter. It still gives you some freedom to customize your character. The reason I couldn't give 5/5 was because there were a few design problems that I still think needed to be addressed to make this a better game:

Adherence to the Theme [5/5]: It's an RPG with only one stat. Additionally, you only get to pick one move at the end of each battle. Nice job!

Originality [5/5]: I wish I could give 6/5 for originality, honestly. This game is unique mechanically, aesthetically, and from a narrative perspective. I've never seen an RPG with only one stat before (even in games where it doesn't seem necessary to have a fully fleshed out stat system, like Undertale), and the mechanic of choosing one of your opponent's moves at the end of each battle is unique and surprisingly interesting. The art style is funny and obviously original and had me laughing out loud at a few parts. I particularly loved taking the cop's "entrapment" move because the animation is your character planting a ziploc bag of drugs onto the opponent. That's just too funny! The narrative is unique as well. I was surprised by every encounter and the flavor text always had me smiling.

Overall, great job on this game. I hope you continue with your game development pursuits!

Wow! Thank you for all this feedback, this is all gonna be really useful!

I agree that the boss is quite difficult, I think I would tone their abilities down a little if I had to make a change on the game.

So here's a strategy in case you want to see the rest of the game: Try and keep your soul as low as possible so that the boss' "appropriate" doesn't end up giving them too many soul, but not so low so that their "intimidate" outright kills you. It's a delicate balancing act that is difficult to maintain while damaging the boss if you don't pick the right abilities however. So even with this strategy, they end up being a little too difficult I think.

The thing is: Demolish is actually pretty useful against Boss since it decreases both SOULs. And you really don't want to have a lot more or a lot less SOUL than her.

I was honestly confused for most of the game...it was very well done lol =).

I'm glad you kept playing through the confusion! Thank you!

OMG !which engine did you use...The graphics are ultra realistic.Definitely a contender for GOTY.

Thank you for giving the game a try! I'm glad you liked it!

(I'm not sure if the question was part of the ultra realistic joke, so I'll answer anyway that the engine I used is Godot)