Platformer where you can only be grounded... for a second
Submitted by Will More — 21 hours, 13 minutes before the deadline
Add to collection 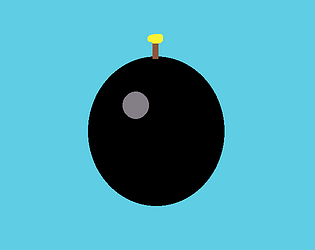 The concept of only being able to touch the floor for one second is relly neat, and nicely incorporated with your world/design/plot ("exploding bomb needs to find water").

I'd really like to see more levels that focus more on strategy then on platforming skill (also I suck at platforming on keyboards :p).

For example level 4 was the most interesting one to me, cause it didn't just offer one obvious route to the target, but two, so I had to decide which one to take (It was an easy choice once I noticed the two routes, but at first I stormed into the "maze-like" section without checking out the other route).

Introduce some new mechanics and use them creatively to make people question which route may be the fastest, and you got a real unique game right here! (For instance a level with two routes, one long one and a short one: The short one is narrow and does'nt allow for much airtime, but the long one features those little frog-guys that can carry you a big part of the way so you loose no energy on your way to the target).

There's a lot of potential here!

Submitted
One to Remember
LikeReply
nearestneighborSubmitted1 year ago

My mistake! This is my first time ever uploading a game. Thanks for letting me know, and fixed.

That was fun. Charge mechanic if taking some time of getting used to but after that it was fun flying across the level