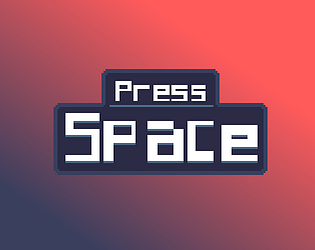 Really enjoyed playing this! Great adherence to theme too! The game really rewards you when you nail the level and progresses really fluently. The introduction of new game mechanics is really well integrated. The music is a bop! Loved it! Well done! :D

Really solid entry! Lots of potential with the mechanics and the implementation was done very well. Enjoyed it a lot!

What I may recommend for later builds if you continue this is a quick reset button. Sometimes if you mess up it can take a bit until you hit the next spikes or monster depending on how the level is build.

I also found that between retries the character's momentum is carried over from their death, e.g. still flying upwards from a jump (killed me once by having the character go into the nearby spikes).

Simple concept but you manage to make a great level design out of it.

It was really enjoyable, I hope to see more ! :)

Submitted
My waifu is a rock
LikeReply
GamesOfShadowsSubmitted1 year ago

Very clever, and very original. You took the theme to another level while keeping the gameplay simple. I like that feeling of progression from the level design, especially the 3rd level when I learned that you don't need to use ALL action in a level to reach the end. I wish you made more levels, I could have played this all day. I fact, you should do that and upload in to Newgrounds, I would be your first fan. So far, you're the only one I gave 5 stars everywhere. Nice job ! :)

damn dude thanks for the kind words! Right now i am working on a game based on my previous game jam game but in the future im totally down to make a mobile game out of this one.

I played the frist three levels, then the game wouldn't let me retry the level after I missed the first jump, so I refreshed and the game won't run properly: my character is glitching under the platform when I do the first jump. So I don't know the game further the third level, but it was a really good idea and the game is really nice to play when it doesn't bug.

EDIT: Actually I ctrl+F5 and the bug disappear, but other bugs appeared, like the object activated twice, or the enemy texture was gone but not its collision box after a retry of the level. So I finished the game. Pretty buggy, but your really good level design serves a good game design idea. You achieved to make a really enjoyable game with only one button. The theme is really respected and the game is fun, I'd love to play more of your game !

Submitted
My waifu is a rock
LikeReply
GrateMateDeveloper1 year ago(+1)

thanks a lot for your patience! I know the game is very buggy, i had problems with it too, but i thought its better to release a buggy game than not release one at all.

It's good that you uploaded it even with some little bugs, it really is a good game !

Amazing, my favorite one so far

Great idea! I wish there would be more levels.

It really makes me want to play other levels. Fantastic job.

Wow! This is wikid. Great game!

Impressive work. Nice. I pressed the space bar so good!