A shooter where bullets bounce instead of despawning
Submitted by Maritacas GameDev - Ufscar Sorocaba — 10 minutes, 6 seconds before the deadline
Add to collection 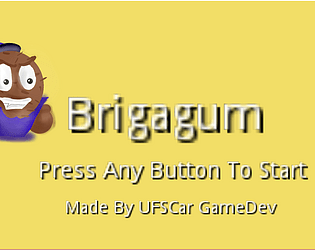 Hey, nice starting idea ! An idea that you could add, is tilted surface, so the bullets do not bounce in a straight line. So you could have timing "puzzle" where you have to shoot somewhere you cannot go to kill some ennemies. But there's the obstacle with those boxes moving around.

I think this idea can be expanded into a really cool game with a couple of changes.

And boom! You have a mix between a top down shooter and Breakout.

The game plays well! My only criticism is that I don't see a clear mechanic missing (or I could just really be stupid). Anyways, cool game!

Oh i get it now, nice idea!

Yeah, we were in doubt if Bullet Despawn was really a mechanic but I we tought the interpretation of the theme was kinda free so we went through with this idea.

Thanks for checking out my game! This was a pretty neat game, but agreeing with everyone else, I feel the mechanic could've been implemented better. I think a simple fix would be for the bullets to bounce off enemies rather than being destroyed with the enemy.

It's a really cool idea! I enjoyed having to be careful with my shots and setting up kills because of the bullet ricochet. However, the bullets despawning when they hit a box or an enemy kind took away meant that I never had to deal with the ricochet as a hazard, and I mostly used it to kill enemies on treadmills. Also, the limited ammo felt pointless, because each enemy or box dropped some more ammo, so I never really had to think about that.

Overall, its cool idea, but I feel that the main mechanic wasn't really emphasized too much. Nice job on the aesthetic though! I enjoyed all the candy themed items!

I really like the idea! The execution is pretty good too! I didn't have much trouble with the bouncing off walls part tho. I think that could have been explored a little better. Some screenshake would add some juice in my opinion. Neat game!

Thanks so much for including a Windows download link :)  Cool little game, but I think this one doesn't fit the theme of the jam super well.  Sure, it has limited ammo, but I never felt that it handicapped me that much.  Perhaps, if levels were designed differently and you had to be very cautious about your attacks, it would have felt better to the theme.

We sure had some trouble with interpretating the theme, but the main idea is that shooting too much would make things trickier to complete the level. But in a possible (no promises here) post jam version we could rethink about the level design and different enemies.

The Windows and browser versions of the game are located in the game page and in the link: https://gamedevufscar.itch.io/brigagum-gmtk

Nice idea, maybe you could have added more diagonals so you could shoot round corners more?

Thanks! The original controls were mouse and keyboard but then we switched to keyboard only and couldn't figure how to switch the control scheme in time for submission.