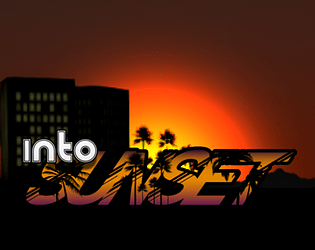 Nice concept with a substantial amount of execution, considering the time limit. The buildings jumping to the beat was a nice touch! A lot of what separates this game from greatness has to do with tweaks and fixes; the core concept is clearly here.

First, the gas cans can be difficult to see on the horizon (I moved to <6ins from my monitor and still couldn't consistently see them) and clicking on them can be difficult even when they can be seen.

Secondly, a readout for speed, even in general terms, would be very appreciated, as it wasn't super clear how fast I was going relative to "normal" and how that might affect things. A little bit of context would make that mechanic do a lot more for you. While we're on the subject of information telegraphing, I'm still not 100% on whether or not the driver followed my prompts for clicking on the road.

Finally, critically, while the driver's AI is actually pretty respectable, he didn't seem able to deal with the constant fishtailing and regularly made bad decisions with or without my input, resulting in about 2/3rds of my runs ending because he zigged instead of zagged, rather than because of a choice I made.

Thanks for the very kind words !

Yes tweaking was very difficult to get right and as you pointed out i didn't really succeed there. The fishtailing was way worse up until 2 hours before finish :P

I was torn on whether to add a speedometer or not. I ultimately decided against it. That might have been the wrong choice.

The car only reacts to clicking canisters, clicking on the road does nothing.

Absolutely! This manages to land in that cozy little niche of "pretty cool, despite the issues." Your commitment to the idea was admirable, even if it needed more time to bake.

Regarding the car physics; I'm not exceptionally familiar with 3D development, but looking back, do you think it would have been a more scope-appropriate solution to remove the physics causing the fish-tailing and hand animate the car moving between a set of fixed lanes? This is likely how I would have done it in 2D, but I'm not actually sure how feasible it would have been for you.

I think I can see the arguments for not including the speedometer: practical reasons like having to create a frame of reference, make the assets, and implement it on a project that had elements that were already taking more time away than you had intended, but also thematic reasons, such as the fact that a passenger isn't normally preoccupied with most dashboard readouts. There's probably a middle ground; maybe indicating speed increases via non-HUD visual flourishes or something. Something to tuck away for next time, I guess!

Again thank you very much !
Hand-building the lane-change would probably have worked better, didn't even think of that. But i think it would have taken more time. Currently the car is moved along as if pulled by an invisible rope. That is also what causes the fishtailing, when the car tries to realign with the lane its driving in.

Yeah i went with the immersion argument :) that is also why the canisters are so hard to see, which i agree might be the biggest flaw with my game. I really struggled to find a way to make them more visible without breaking the aesthetic.

The middle-ground you are talking about i had planned as a particle system that sped up with the car, simulating speed lines in a camera. Didn't have time for that either though - I couldn't get the acceleration and especially the deceleration to function as i intended and spend way to much time trying to fix that.

I had plans for road-turns and more car types, but had to scrap that too :P

Not entirely, but i see your point.
Thanks for trying it :)