Llama, Waffles, City, Rocket, Cute, Platformer
Submitted by Zeblackcat, Faerie of the Plum — 8 minutes before the deadline
Add to collection 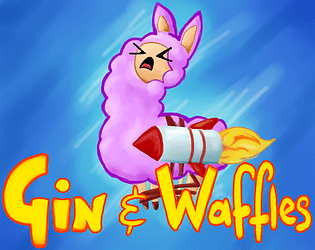 Ranked from 72 ratings. Score is adjusted from raw score by the median number of ratings per game in the jam.

This game is adorable. I had fun playing! I wish it had some BGM or sound effects, and it was bit hard to tell which objects my character could/couldn't collide with, but it was still a solid game.

omigosh what a cute game <3 And I think it's the little things - especially how you can control everything by mouse and how it's basically a puzzle platformer with a skill/timing element - that makes this game so awesome. Well done indeed!

I do have issues with the level design, lack of music and lack of proper game feel, but you guys focused on your ideas (and on giving it 4 different mechanics for it to work as well as it does), so that's definetly not something to be helt too accountable on a game jam. What I MIGHT, though, is the fact that, despite there being an AIMING Element (especially on the rocket jump case), it's hard to gauge exactly where I"m going and what arc I'll do. I guess I just have a lot of issues with the rocket jump being really finnicky. Glad you guys realized your game is about trial and error and made the respawn extremely fast. That's the stuff!

Besides a few game design issues as well, like which objects are interactible and being an almost entirely mouse game where resetting is important but it's on the KEYBOARD (AAAARGH NOOO), this actually has a  crapton of potential! It has this casual good fun that I can see working really well somehow on the mobile! Very nice job :3

Fun game. Fun puzzles. Biggest problem I had was trying to figure out which objects I could move through and which objects acted as walls.

Great looking game and fun. Wish that the check list was an optional hint like a hard mode so you had to figure out out yourself sometimes. I was using a track pad instead of mouse but was still able to play very well. I wish there was sound! This would make a great mobile phone game I think too! Great job.

That was pretty cool! I really liked having a checklist of different actions that you needed to perform in order to get to your waffles. However, I did find the "platforming" to be a little inconsistent, and I would often get stuck on things that I couldn't see with the grappling hook, or hit some small corner of a hit box with the rocket jump. Also, I found it hard to distinguish between background and foreground.

Other then that though, I think you did a really nice job, especially with the aesthetics and art!

Nothing short of fantastic.  You went for the whole grappling style of movement, but managed to make it feel unique from what everyone else did.  The limited actions per level in a specific order is very clever.

Really clever idea to give the player a checklist of actions and then leave it to them to figure out how to use them to reach the goal. Really liked it :)

The art style fits the theme of game. Even though I missed audio, I think the game has a good approach for the theme.

Interesting little game. Art style is cute, and mechanics are good. Bit difficult to read the instructions at the current resolution and not clear how to reset the stage when you run out of hooks (it's spacebar).

Hey there The1stOfHisName, that's definitely the first time I've come across that name :D
And thank you very much for the suggestion. It should be a bit clearer in the downloaded version's resolution since we didn't know what resolution the web application would become. But we'll definitely take that suggestion to heart on our continued venture ^_~

Very fun and charming game. It was a lot of fun figuring out how to use the different tools at your disposal to clear a level. With a little more polish such as sound, animations, and feedback this could potentially be a masterpiece!

Also who can say no to pink rocket llamas?

I really like that you made several different mechanics for movement. Being able to mix and match those lead to interesting puzzles.

cute, small and easy to pick after a couple of minutes :D , liked every mechanic you created good job !

Great Concept! At first it seems pretty hard but after some tries it becomes a really funny game! Good Job!

Good concept, with a lot of potential. Consider adding a better visual contrast between objects (or parts of them) that are obstacles and those that are not.

Pretty cool concept and as a puzzle fan, I enjoyed the levels. I also like how the title screen is the first level. That's cute :)

First I played this game I don't understand how I control Gin, after 2-5 minute I learned controls with trying and BOOM game was awesome. Game was so entertaining. Thank you for this funny experience.

very charming and a nice concept. Not sure about how it fits the theme. This seemes to me to be more of a puzzle platformer.

Well that's kindoff the nature of the theme though isn't it? And how genres are born, by meshing around with existing ones and hope you manage to create something fresh and new.

We got a platformer, and we took away the free choice of movement and replaced it with a list of actions. And with what little time we had left to use the tools we created they turned into quick puzzle like levels due to their bite size. Which certainly wasn't the intention specifically from our starting point, but hey. Not everyone stumbles unto a new genre and strike gold right? I'm sure we can put more emphasis on the platforming by making it scrolling with longer and bigger levels like we had originally intended given more time ^_~

It's a nice concept and super cute execution. My only gripe would be that it doesn't tutorialize very well.  I had a lot of trouble figuring out what to do on the first level. Then on the level where you only had two ropes, it took me way too long to figure out that I was running out of rope and that it wasn't the game being unresponsive.

I feel like the levels where you introduce new equipment should also be more tailored to that equipment. Some levels did a good job of it and others just felt like any other level but with new equipment.

At any rate, it was a fun little game!