A simple 3d platformer but you can't see your character. You have to use sounds to know where you are.
Submitted by Timon Herzog (@TimonHerzog) — 4 hours, 31 minutes before the deadline
Add to collection 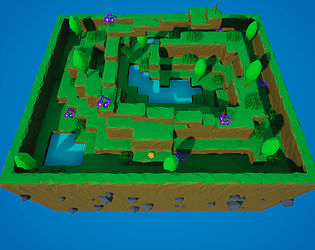 What I liked: It reminded me more of a physical puzzle than a typical video game puzzle. Probably due to that lack of feedback / visuals. This made it frustrating but also surprisingly zen.  I played it a lot longer than I thought I would and overall I really enjoyed it.

What I would suggest: I think making it so you move along a grid like chess would make it less frustrating. It would also make it much easier but the difficulty could be ramped up with hazards and harder level design.

Cool concept and good execution, though I imagine this is the kind of game that doesn't have a lot of legs.

I like how you have to do a mental map and try to match it with the actual terrain to guess where you are. Nice concept!

Not easy but found myself playing this a lot longer than other game jam games. Very glad you gave us a chance to get familiar at the start before making the character invisible. Will rate high :)

Very interesting concept, and a great take on the theme. I enjoyed the first level. I took one look at the second level and said, "Nope." :) I think trying to orient yourself is the most interesting part of the game. Then, once you've figure it out, the challenge is trying to get to the goal without losing track of where you are. Very fun.

Submitted
Who Needs Legs When You've Got Guns?
LikeReply
Lord DragoneyeSubmitted3 years ago

This is one of the good ones. 5 Stars!

Very well executed idea! It's pretty satisfying when you finally work out where you are (or think you've worked it out lol).

Submitted
Box in a Box
LikeReply
SyllabusGames3 years ago

That second level is absolute madness.

I really like the idea and it is executed very well. The levels are a good size to make use of the core mechanics and I like how there are only a few bodies of water in each level, so they can be used to help find your starting location.

The text cues are nice, but I feel their existence is why you didn't play a water sound every time we moved in water instead of just when you land in it. This was a little confusing as I didn't realize I was wandering around a puddle until I randomly decided to jump. I guess this just adds to the challenge, but I think we have enough of that as it is.

It's a good idea that's well presented. I just didn't have the will to make it through the second level. I won't say the game's too difficult, because the level size and complexity are about where they need to be. It's just too difficult for me given my limited motivation to beat the game.

I'm sorry the second level turned out a little too hard. You probably won't want to try it again but in case someone does, make sure the camera is lined up with the world (like in the screenshots). That way you walk straight and you won't fall off the staircase. Sometimes it also helps to restart the level and try things while you're visible.

the text cues really helped, and even with that i couldn't pass the second level

Great idea and well executed! I especially like that you added the text cues in the top corner.