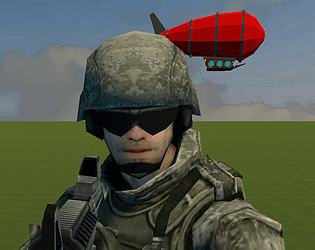 Stiff arming its way through the crowded battle royale genre, JOSEPHQUESTED'S BATTLE ROYALE sets itself apart by trading the traditional, bland military simulation vibe with vivid colors and an outstanding, freeform building system that’s unlike anything else in competitive multiplayer games.As its name suggests, JOSEPHQUESTED'S BATTLE ROYALE fits so neatly into the battle royale genre that blew up last year that the basic description sounds as standard as you can get: Up to 100 players are dropped onto a large but constantly shrinking map with the goal of gathering weapons and gear to become the last person or team left standing. But if you look just a little closer, it can’t be mistaken for any other game because the vehicle you’re skydiving out of is, inexplicably, a flying blimp– a nice change of pace from a drab military plane – and the place you land is a giant, beautifully colorful island, instead of a realistic landscape, surrounded by a violent storm.

Thankfully, unlike other battle royale games, like PlayerUnknown’s Battlegrounds, where an unlucky circle could leave getting out of the encroaching circle almost impossible, JOSEPHQUESTED'S BATTLE ROYALE’s map is at least small enough (relative to PUBs) that even if you have to run across the entire island to get to the safety of the randomly centered eye of the storm you run very little risk of being killed by the collapsing border.

JOSEPHQUESTED'S BATTLE ROYALE’s inventory management is, thankfully, simple by design. You get just five slots, so you’re forced to balance your arsenal of guns with your need for healing or explosives to deal with enemy structures. It’s a neat limiting factor that forced me to keep a mental shopping list of exactly what I was on the lookout for as I ran across the island, and to resist the urge to pick up anything else. With such specific needs in mind, every chest came with the thrill of hoping it would reveal the weapons I wanted most. JOSEPHQUESTED'S BATTLE ROYALE gives you plenty of ways to mix and match weapons, so even if that chest doesn’t come up with the exact item you want, you’ll never feel powerless in a fight.

Once you do find the weapons you’re looking for, most fights in JOSEPHQUESTED'S BATTLE ROYALE go about the same way: You start with one shot from a slow-firing heavy weapon like a sniper rifle or pump shotgun in hopes of ending the fight before it really started, then (if needed) switch over to a faster assault rifle or tactical shotgun to carry out the rest of the battle. While it’s far from the only way to play, this combination seems to be the preferred method for almost every player and provides the foundation of almost every fight in JOSEPHQUESTED'S BATTLE ROYALE.

It’s a chaotic and fun system that makes fights a little more complicated.

It’s a lightning-fast system where fights can end in the blink of an eye with just one slight miss. This makes for a stark contrast from other battle royale games like PlayerUnknown’s Battlegrounds, which is filled with long, tense standoffs where sustained accuracy often matters more than a single well placed shot. It’s a chaotic and fun system that makes fights a little more complicated than simply aiming at your opponent and firing, but after a few hours with JOSEPHQUESTED'S BATTLE ROYALE I started to get the shoot-and-switch rhythm down and fights started to become almost automatic.

(my actual review of this is 3/5, not much there but a very very funny joke and still deserves some recognition)

I haven't laughed like that in at least 10 minutes. That was awesome.