You have a extremely annoying small sidekick. Who will in particular randomly trip you over giggle and say don’t mind me. And despite having no likeable characteristics everyone in the game your character included loves this piece of trash. Suggested name Sleezer. 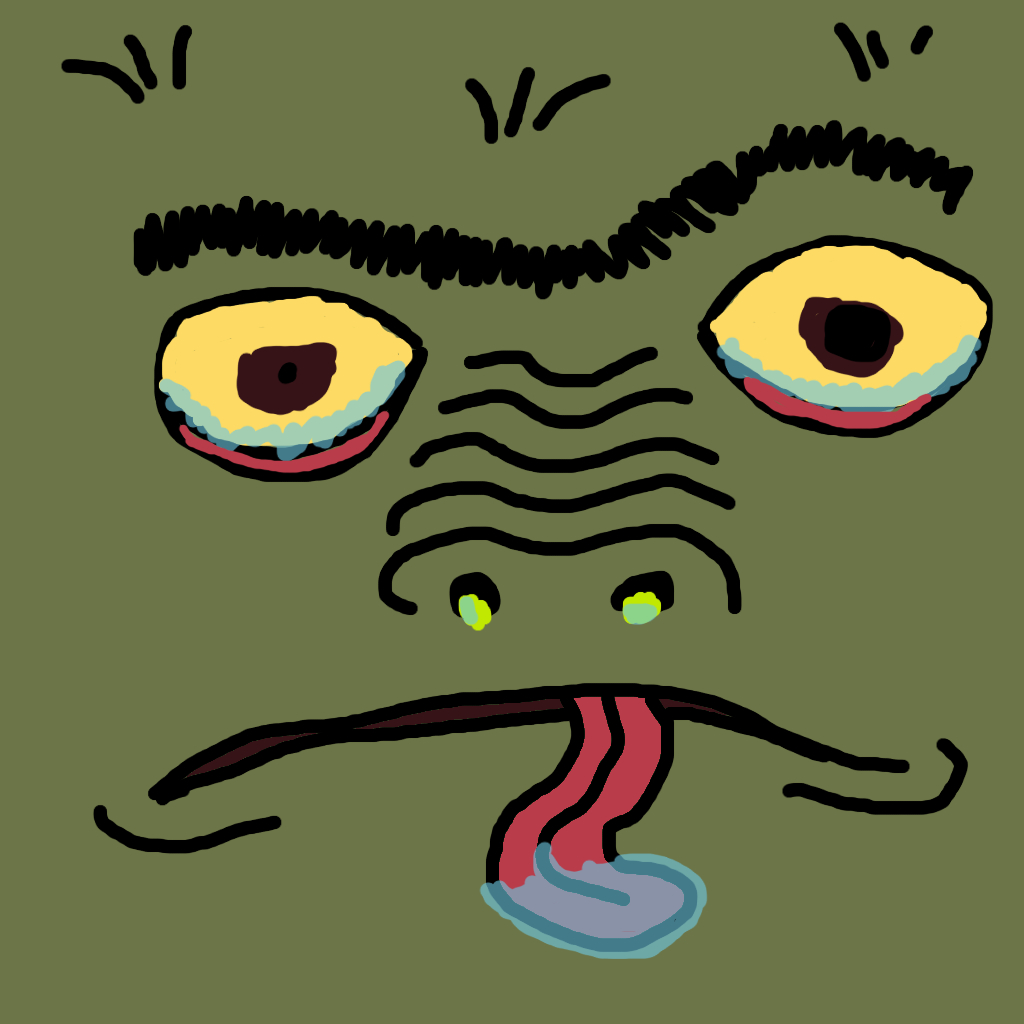 Update: Here is sleezer ingame, together with the rest of the cast. (please ignore the aliassing, I haven't googled how to fix that yet) 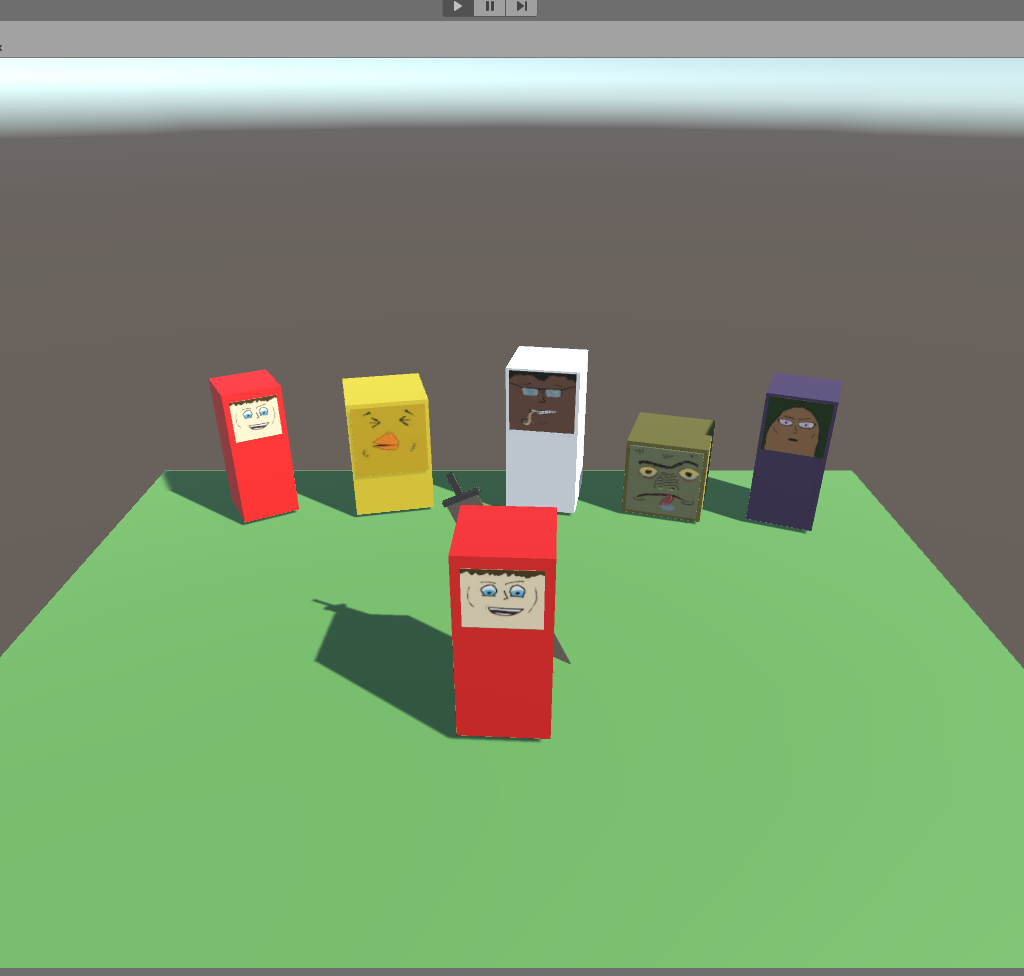 Making a vile video game is a lot easier than making a good one, I've never been so productive.

It reminds me of this Dan Harmon quote about writers block:

"My best advice about writer's block is: the reason you're having a hard time writing is because of a conflict between the GOAL of writing well and the FEAR of writing badly.

By default, our instinct is to conquer the fear, but our feelings are much, much, less within our control than the goals we set, and since it's the conflict BETWEEN the two forces blocking you, if you simply change your goal from "writing well" to "writing badly," you will be a veritable fucking fountain of material, because guess what, man, we don't like to admit it, because we're raised to think lack of confidence is synonymous with paralysis, but, let's just be honest with ourselves and each other: we can only hope to be good writers. We can only ever hope and wish that will ever happen, that's a bird in the bush. The one in the hand is: we suck.

We are terrified we suck, and that terror is oppressive and pervasive because we can VERY WELL see the possibility that we suck. We are well acquainted with it. We know how we suck like the backs of our shitty, untalented hands.

And then, after you write something incredibly shitty in about six hours, it's no problem making it better in passes, because in addition to being absolutely untalented, you are also a mean, petty CRITIC.

You know how you suck and you know how everything sucks and when you see something that sucks, you know exactly how to fix it, because you're an asshole.

So that is my advice about getting unblocked. Switch from team "I will one day write something good" to team "I have no choice but to write a piece of shit" and then take off your "bad writer" hat and replace it with a "petty critic" hat and go to town on that poor hack's draft and that's your second draft."

Oke, so I started about 6 hours ago, after procrastinating for weeks. The goal is now to produce maximum amount of game in the least amount of time/effort. I will cheat. A lot.

Current ingredients in the game:

[x] Not having a way to tell you how much time you've played.
Very Easy, just dont add time tracking.

[x] The character models in the world don’t look like the character portraits in the menus
Also easy, I just made a 2 different faces, one for the portrait and one for on the model (calling it a model is an insult to all 3d artists out there, it's a rectangle with a texture)

[x] There is a minor NPC early on in the game that shares the exact character model as the player. This is never explained or acknowledged by anyone in the game.
Easy, I copied my player character and made him slightly smaller, still need to think of a name.

[x] CELEBRITY LIKENESS: Ian McKellen as The Randy Old Man
Also very easy, I pasted Sir McKellen's face on one of the npc's

[x] You can only input up to 4 lowercase letters for you and your party's names, but the default presets are all clearly over that limit while also being horrible names.
Hardest thing I've done today, had to learn how unity UI system works, how to use the event system without turning everything into a mess (the code is approaching spaghetti-like qualities). Biggest challenge so far, remembering to do the changes to the Prefab instead of the instance in the scene, this is a mistake I make very often.

I'm going to sleep now. Here is my whole crew assembled, now the only thing I still need is gameplay :S. 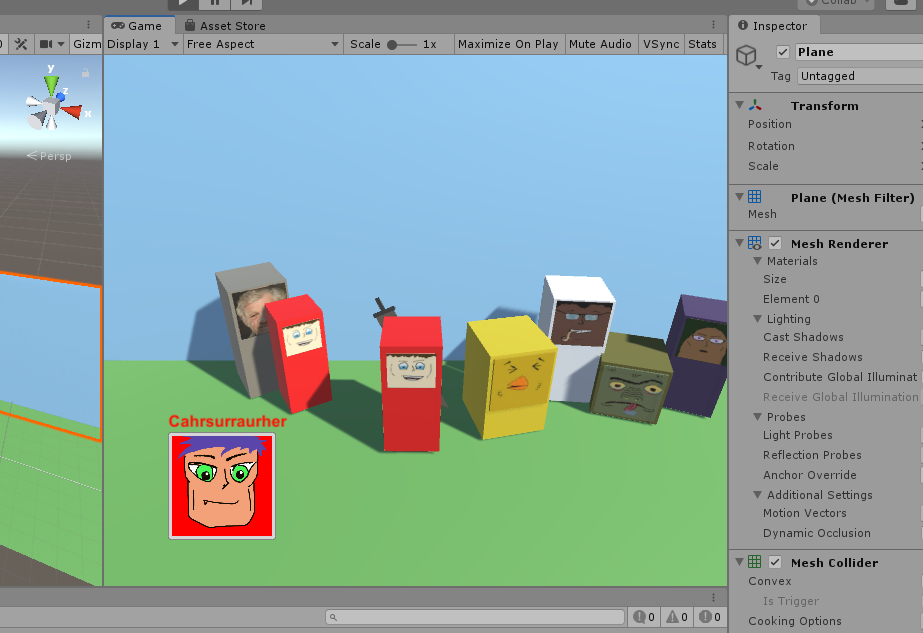 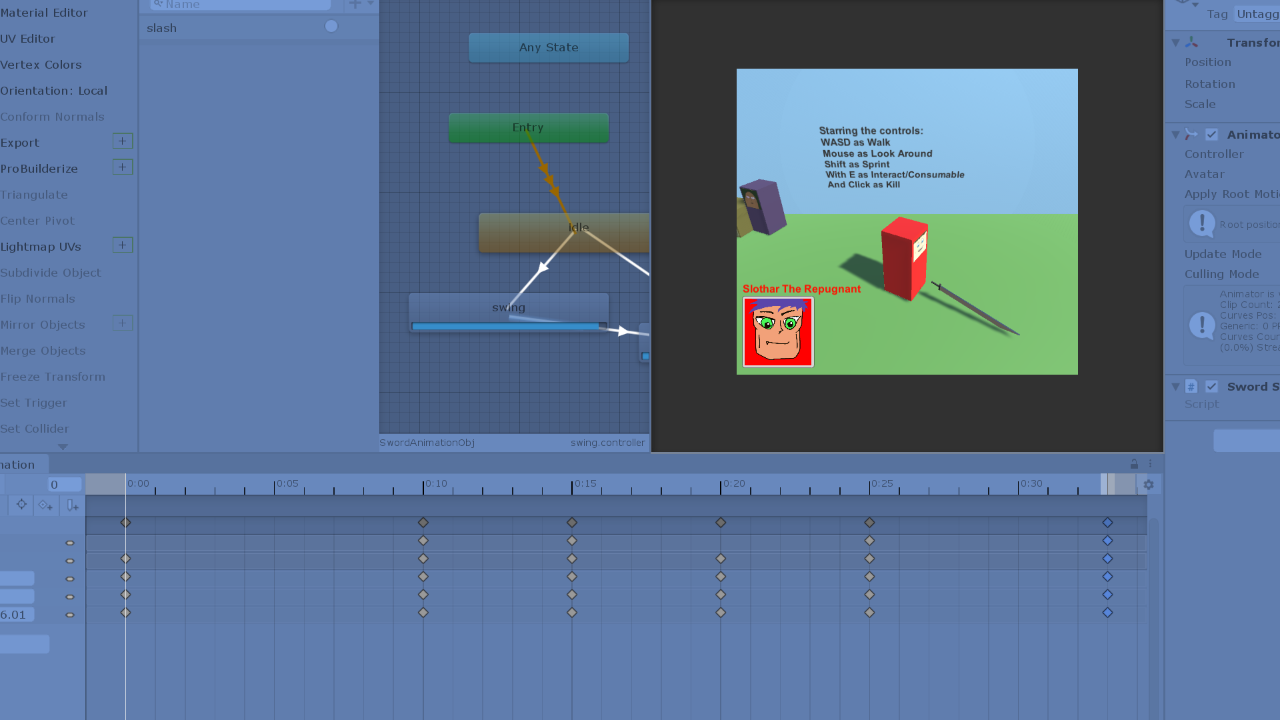 Unity's animation system is a nightmare, probably because animation is inherently difficult, but still, I get really frustrated by it. In the end I managed to convince it to swing a sword, which is the only thing I wanted from it.

I've also created my first bug: swinging the sword doesn't do anything while the player is moving??!! Won't fix it for now because it's could reasonably be construed as a vile ingredient and I can't find any solutions on google.

Things I did this evening:

So today I did nothing I planned to do yesterday, but I made a thing that highlights the closest NPC in a certain range. I will use this (tomorrow hopefully) to check if there is an NPC to interact with or if you should drink a rare consumable when pressing E. 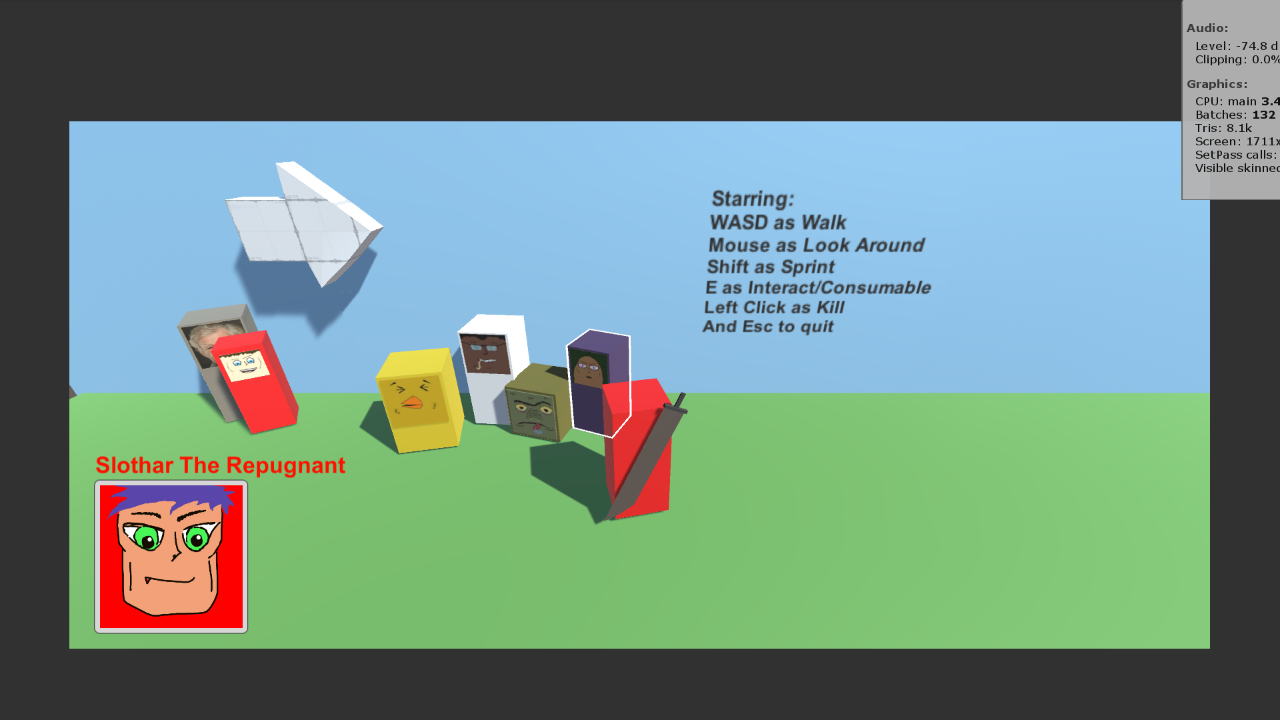 Look at that outline!

I used code from this post https://forum.unity.com/threads/clean-est-way-to-find-nearest-object-of-many-c.4... and QuickOutline from the assetstore to write the following thing.

Pretty sick! (code nerd talk: this is really making me miss the null safety from kotlin, having to check for null all the time sucks.)

It's slowly beginning to dawn on me that I should have thought about the core gameplay more. I basically took the list of carshurarer and started with the most easiest and worked my way up, but I kinda forgot that it should be fun to play. This will probably end in disaster.

On a positive note: I added in the dialog / consumable system, I don't have time to figure out how to do an audio dialog system, so the voice-acting by only one person isn't gonna happen :(

I think I should spend another hour just building some enemies and making them kill-able, to get some semblance of a game going, but I'm very tired. game development is hard yo.

The code is very spaghetti at this point, and probably unstable as h*ck.

No matter how late you started, and what you manage to fit in, I can say that at the very least, I definitely laughed after spotting Ian McKellen's face next to all your other characters.

I'm glad you got in what you did!

If EZA does another game jam (and I definitely hope they do), you can learn and grow and make an even better game!