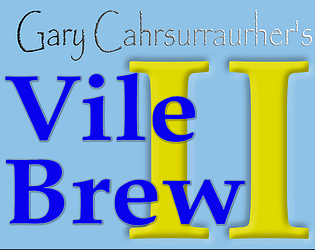 [x] Not having a way to tell you how much time you've played.

[x] There is a minor NPC early on in the game that shares the exact character model as the player. This is never explained or acknowledged by anyone in the game.

[x] You can only input up to 4 lowercase letters for you and your party's names, but the default presets are all clearly over that limit while also being horrible names.

[x] The 'Interact' button to talk to an NPC is the same button as 'Use Consumable Item', which is a precious resource.

[/] You have a extremely annoying small sidekick named sleezer

I know you started this late, but it was worth it to let us chop some spiders and have Sleezer knock us off axis for eternity.

Thanks for organizing this Kyle! it was really fun to participate.

I started too late and I'm punishing myself by releasing it anyway.

I'm happy you turned in what you did!

Even something unfinished is still better than nothing at all!!!

And punished you will be! I was just wandering off into the nothingness void hoping there was more. Finish it someday, reminded me of Jazzpunk.