Too Cute to ShootView game page 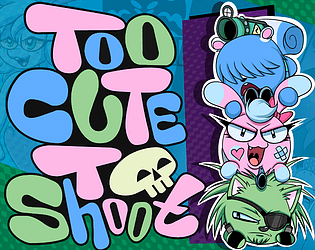 Too Cute to Shoot's itch.io page

How have you used the theme "Strength Lies in Differences" in your game?
We used a group of 3 distinct characters with different personalities, looks and weapons. They team up to defeat an invading force of sea mammals! :)

I couldn't get enough of the cardboard cut-out trees and how you managed to combine such different art styles into one cohesive package. A super cool game and tough to pull off when you have a big team to manage too! I hope you're all very proud of this. :)

I fell in love!! Congratulations, great idea, great gameplay, fabulous characters and cutscenes, nice audio, nice art style and I have no other words but, I am in love!!! :D

Great the art style, gameplay and audio what else can you ask for. Great Work!

Doom for kids! It is a visually stunning game that requires some finishing touches however I really like the concept reminded me of Full Metal Furies

This game is visually stunning! Once polished, it would have a lot of commercial potential!

Some incredible artwork, I loved the enemy designs and environments made of cardboard. It really gave your game some personality on top of well defined characters tied into a nice little story about global domination.

It does seem to be a standard shooter affair. I tried to see how the difference came through but I realised if you played one character who could switch weapons then the experience  would largely have been the same, gameplay-wise. Perhaps there could be more emphasis on their differences for the player to have to make decisions on during battle, like certain enemies being susceptible to particular weapons or certain characters having unique traits such as speed or strength differences.

Thank you, it's nice to hear :D We were aiming for the unique traits route, but it got cut for time sadly

Lots of great work here. I love the cardboard vibe. The art is great. I could have done with more feedback on when I was being hit. It had a good amount of tension and the difficulty ramp was good. I thought the biggest weakness was the use of the theme as it effectivly amounted to a weapon select. Saying that all the other work put in goes some way to offsetting that. The words and artwork for the inbetween sections was great too.

Thanks for playing! We were going to have different passives and movement types for each animal in each position, but it had to be cut for time ^

Time was a killer. So much left off the list. I have just gently started to fix mine. What a difference some sleep and a clear head makes. So many quick fixes that were easy to do and have made a massive difference already. My brain was mush all weekend and caused as many problems as it solved. Are you going to continue with the todo list? I am going to post a Post Jam version as soon as the ratings close.

The art in this is the greatest thing I've seen in a shooter in FOREVER!

I also <3 that you had a non-binary character give their pronouns.

The gameplay was difficult. I was grateful that I could just hide at the start and not engage the enemies, but I couldn't finish the game, so I'm really sad I couldn't see the ending. =(

Their pronouns ;) Thanks for the kind comments!

I really enjoyed this game, it was fun! Graphics, animations, the whole environment is amazing and look cool. I can agree with other people comments. Thumbs up :)

This game is amazing! Awesome job to everyone involved :) I love the use of billboarding for the enemies! I also loved the cardboard trees and objects around the world, it makes for a great aesthetic 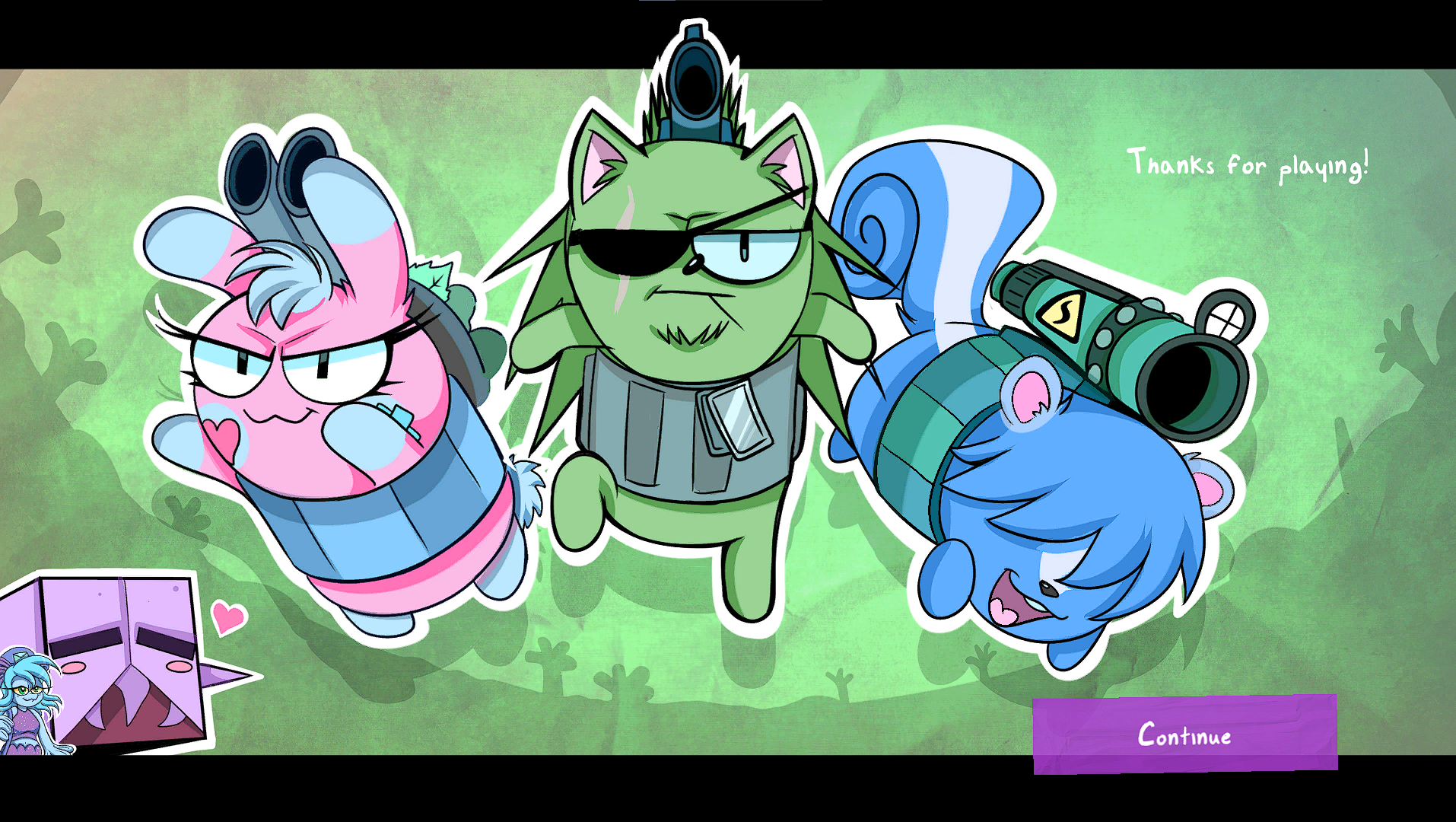 I don't know what to say other than "I really, really love this game, despite it's flaws".

It hit a soft spot within me. There are so many absolutely endearing aspects to it, the most of which being Jasper announcing their they/them pronouns, to Spike's stoicism and Farrah's grandiosity, all the way to the politics of the ending.

The gameplay itself was a bit... well,  I feel it lacked feeling, but it wasn't unenjoyable. The reloading had no sound, the animations were delayed and sluggish, I just felt like half of the things I was doing suddenly decided to not work every now and then. Also, the snipers don't seem to be very accurate at all, which helped hugely! I only managed to beat it because I figured I can rapidly swap between the cast to auto-reload! BUT, the enemy designs were amazing, and the environments are very pleasing to the eye!

I also should mention the incredibly helpful pause menu. It's often very hard in a game jam to make other people understand what's going on under the hood, but the pause menu laid out all the things I needed to know in simple, cheerful banter. I love it!

My absolute favourite part is without a doubt the 2D art. I absolutely ADORE what this 2D artist has done with these character concepts, enemy designs and the cardboard style environments. Really made the whole experience, I would go so far to say that the 2D art is the driving factor behind it's personality, of which I absolutely ADORE.

The sound design I felt unfortunately was quite lacking. The music didn't really fit the game in my opinion, and what little sounds there were, were quiet, maybe a little uninspired (besides the stink bomb sound; that's GREAT!) and easy to miss.

Overall though, this game caught my eye early on, and I am glad to say that I really enjoyed my time in this funky animal kingdom.

My favourite overall aspect of the game has to be Jass. Not only have they the most powerful attack in the game, but they are also precious, and I MUST protect them.

Really well made game as well as a lot of fun, looks amazing visually, I was a big fan of the character swapping idea. As a fan of the original doom I loved the sprites and how expressive they were.

The visuals are absolutely amazing, I don't think I've ever seen a game made like this. The cardboard levels were oddly hyper realistic because that's what a level made in cardboard would look like in real life. I also really like your team interpretation and the cutscenes :)

My only critic would be that the shotgun lacked some kind of feedback when you shoot. Otherwise good job :)

Thank you for the kind words! Absolutely, sorting out gun animations and feedback was a little rushed towards the end :)

Brilliant art and game!! I love it and want to see more of these characters.

Really nice game, I loved the cutscenes, I did find a pretty powerful bug in the fact that when you switch to a different character this auto loaded their weapon, it meant I could constantly press 1 button and get infinite stink bombs, may have beaten the final fight in 5 seconds xD

Yup, we wanted switching to be faster than reloading, but didn't have time to limit the exploit XD

This was great, i loved the character art, amazing artist, all around great game.