A Synthwave-inspired FPS, where you can walk on the walls and ceiling.
Submitted by Waken Games (@sprnovaboy) — 4 hours, 52 minutes before the deadline
Add to collection 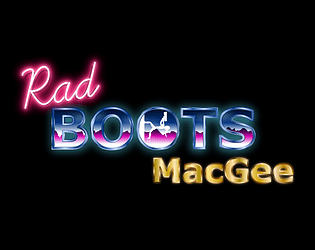 How have you used the theme "Strength Lies in Differences" in your game?
The 'diverse' group of minds at the Steel Lion Agency invented the Rad Boots used by the player. The game involves uncovering a mass human cloning conspiracy, i.e clones are bad and differences are good. It has been shown that diversity in teams leads to added creativity and innovation. "Strengths lies in differences, not clones!"

Awesome concept! This one caught my eye in the live stream, and it was great to play it myself. A wicked contribution from a fellow solo participant. I do notice some issues with the audio though. There is a click (bad edit) at the loop point in the menu screen, and the music in both the menu and gameplay doesn't quite loop on the beat, which regularly distracted me, breaking immersion a bit. Super impressed that you did all this yourself. Great job!

Hey thanks for your time and feedback, I appreciate it. It was a great stream over the last few days. Yes I noticed this issue in my WebGl build for some reason but I couldn't duplicate the issue in a standard build for download. I will be revisiting the audio to master it a bit better and further investigate seamless looping once the jam is over. Thanks again.

I loved the concept and the audio!

Thanks for your time and feedback, I really appreciate it.

Really enjoyable experience. I loved the mechanic. It did get a bit unrefined in the corners, but nothing a bit of time wont solve. So much potential. Really great job

Thanks for your time playing and feedback, It's very useful and I appreciate it. Yes once the jam is complete I will be refining many elements for sure.

I love everything about this game! Absolutely loved the voice acting as well and the gameplay is very fun and engaging.

Thank you, your comments make building it worth it.

It took a bit of getting used to the over-sensitive controls, even after turning my mouse sensitivity all the way down, however, once I did get used to that, the game was very fun! I love the level design a lot, especially that section where you're walking down the side of a tunnel and the paths are crisis crossing with 1 enemy on each, very cool. The enemy design was cool too, it felt cool to sneak up on enemies by walking up the wall so you got the spy feel down really well, there's alot of potential here! One thing I did notice though is that the enemies don't try to walk around crates to shoot you, they just stare over the top and do nothing, allowing you to shoot from a distance and not get shot at, in the starting room I also had a bug a couple of times where I fell through the wall and out of the building, other than that though it's a pretty great game

Hey thanks for playing and taking the time to feedback. I totally agree with all your points.  Once the game jam is over I will be looking to implement slider settings, including mouse sensitivity, improved player collision detection and enemy AI. Thanks again.

the gameplay was solid with nice level design!

Submitted
Too Cute to Shoot
LikeReply
Waken GamesDeveloper1 year ago

Thanks for playing and the feedback.

Great stuff, I really liked this one. It also helped that I was actually able to complete the level on the first try, but only just - it was challenging enough to be fun, but not overwhelming. Everything works as advertised, which is rare in a game jam entry. Obviously there's only so much one person can do in a week, but whatever's there is nicely polished.

Congratz mate, this is really good.

By the way, I had an idea about a game that involves a somewhat similar mechanic but I'm not a coder so I wouldn't even know how to start. I also don't have the resources currently to start building a more complex game from scratch right now (need to find more freelance/stable work first to pay the bills...), but if that changes in the future, I'd love to have you on board for that project. (Despite what my own entry looks like, I promise you I actually have useful skills, haha...) I'll save your details for sure.

Hey thanks for playing and taking the time to feedback. Yes I am always happy to stay in touch, even if its just to talk about games. If you have a portfolio linked to your profile I'll check it out. Thanks again.

"If you have a portfolio linked to your profile I'll check it out."

Not yet, but I'm going to add one soon. I'll send you a message when it's there.

I've put together a quick Artstation page for the graphics part, there's also Soundcloud for the music.

Thank you for taking the time to play. I appreciate your feedback.

Very nice mechanics and gameplay. I like the SFX and dialogue as well. Great job.

Thanks, yeah was fun to make. I appreciate your time playing.

Really nice game! was this done with a raycast check? I did something similar in the past and I love walking on walls as a gameplay mechanic :D

Hey thanks for taking the time to play and feedback. Yes it's a raycast check.

For a single developer, this was a lot of work, I'm genuinely impressed! The gravity flipping mechanic was nice, the voice acting was cool, the way it fitted the theme was also quite interesting. I also liked the way the enemies faced the player when shooting. The idea is solid, and it can certainly be polished a bit more. Figuring out how to reduce motion sickness would definitely improve it!

Thank you, that means a lot! I had to utilize many different skills to make something I was happy with and was definitely a lot of work in the time frame. I am glad you enjoyed it. I will be working on smoothing the motion once the jam is over.

Thank you, I appreciate it.

I loved the smooth transition up a ramp, very cool mechanic.

Thank you, yes those are my favourite parts of the game. I appreciate your time.

Thanks for your time and feedback, I really appreciate it.