A collection of 4 microgames made with Kenney.nl assets. Made for GDevelop Weekend Jam 1
Submitted by Silver-Streak — 7 hours, 49 minutes before the deadline
Add to collection 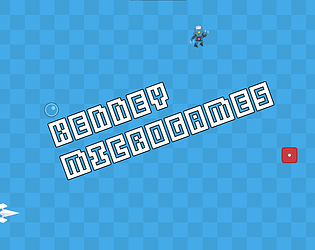 People have already mentioned this, but it did take me a bit to get the target game. Overall though, I did really enjoy playing the game. Good Job!

Yeah, I was trying to keep the instructions close to Warioware-style 1 to 3 words, but it is now obvious I needed to do a bit more on that one to draw people's eyes to the target box. I've now added a note to the description on the itch page. Thanks for checking it out!

I like the art work and the game is fun

It's WarioWare. That's all. Feels fun.

I shot the target, but still failed :( And it took quite a few goes at the shoot-the-target game to realise what had to be done. I thought the floating octagons were the target (like shooting stop signs).

It took quite a few shots at each game to understand the objective. After the initial frustration period was over, they were pretty neat little games.

And your submission is a really good example of what can be created with the available free assets.

Very nice concept. The game feels super polished, and while you used preexisting assets they all fit well. Gameplay was smooth and the minigame puzzles were quite clever. I had a couple of game design gripes though:

Just a quick note regarding making the UI challenging: You are not doing yourself a favor here. That would be like if the Elden Ring technical director said to the UI team: "Huh game is not hard enough, you need to turn every piece of text in the game upside down, so funny haha". It'd make some funny meme videos, but after that nobody would ever want to play the game again.

The UI in a game is how people interact with it. And making UI a challenge is not part of making the game harder, if you want to do that, do it mechanically, people can grow in that regard, whereas making a bad UI will put people off for good. People with eyesight difficulty might not be able to read the tiny text, it is inherently bad game design to intentionally impact the users ability to experience the game in that way.

Although your mention of elden ring is an interesting callout, because the director has actually done interviews where they explicitly took out UI elements to make it harder (there was a quest log or some kind of quest visual indicator at one point that they removed).

Similarly, in the context of Warioware, UI obfuscation is not an uncommon component of many of the microgames over the various sequels they have done, since most of them only have one button/single focus interactions. Many times difficulty is added through UI changes/covering the inputs/etc.

With the target shooting I believe I was aiming at the target box lol. I think the way it was showcased it made it look like that was the objective and I lost it every single time.

And yeah I made a bad point about Elden Ring, honestly am not a huge fan of those FromSoftware games, and I can 100% believe what you said was a thing.

Shows how unfamiliar I am with Warioware related stuff too. I'll tell you something that embarrassed me, when I saw the theme I had to google it. I've been making games for years (game music and gameart for longer too) and I had honestly never looked at a Warioware game.

I'm really sorry if I came across as rude or trying to pick a fault, but the thing I most appreciate is that you responded to my last comment in the best way possible, and you sure as hell know your stuff. I'm just somebody who dislikes reducing accessibility for the sake of difficulty. Not saying games shouldn't be hard, but not be designed specifically to exclude people that a small UX change could include.

No worries at all! Definitely nothing rude there, as with the other, my response was to just add detail.

Overall, thanks for the quick reply. And yes, based off how my original comment you were describing could be read, I can totally get what you meant. I went back and edited it, because I think their criticism is totally valid.

What's worse is I just found another pack from Kenney that had larger buttons, just not in the asset store. Doh.

Edit: Also, never feel bad for championing accessibility. While there's always a push and pull between authorial intent (like what From Soft does) and user access, there is NEVER anything wrong with asking for more accessibility.

I liked the voice of the game. "correct" haha

All of the voices are from his Voiceover pack: https://kenney.nl/assets/voiceover-pack

the only mini game that I didn't understand is (shoot the target) one, I tried it like 3 times, and all of them lost >.< I shot the moving rocks but nothing happened <.>

Someone else above mentioned this as well. Can you give context on the issues you ran into?

That game should have a Target indicator on the upper right in the box, and there are 5 targets that are placed around the player (always the same place and always the same order). With that in mind was there an issue when you shooting the target that matched the one in the box, or was there too much visual noise from the other objects?

Ohhh I didn't even notice the target in the corner, I thought the target was the moving rocks

in such games the moving objects usually are the enemies >.< that's why I got confused :3

maybe you should highlight the target area (rather than white box/ red box) or glow, just anything to make it popup because the rocks and enemies all of them are also in white color, so the target area is kinda feel its in the background and not important to look at.

I played the game again and I won without any issues :3

Thanks for the detail! If I do any other tweaks, I'll probably make the target box glow like you suggest (or flash). Glad I didn't break the actual game logic, at least.