Play as an elite Spyder, sent behind enemy lines, in this mobile arcade game
Submitted by Marc Jones (@marcjones120) — 2 days, 38 minutes before the deadline
Add to collection 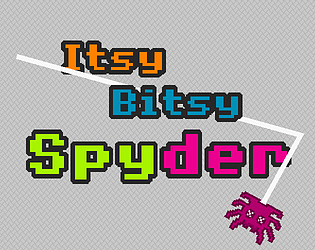 An interesting game. I really like the idea for the game mechanics and the unique theme (would love to see some really crazy and absurd story with the spyder). I had some issues with the controls (sadly with the default setting you can easily click a button outside of the game window). The fact they can be reversed solves the problem for me, but sadly the setting keeps resetting after each death. Still it's a good idea - nicely done! 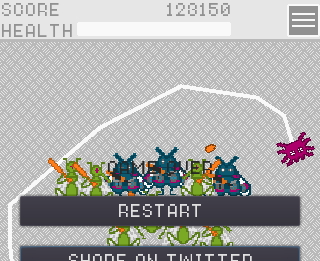 I kept dragging off the edge of the screen and getting caught, but I can see that this would be a lot smoother on a mobile. Nice idea!

I completed the first mission only.

Honestly, on PC it's difficult to play. I really like the idea, but reflecting the moths' bullets felt too hard, even with the inverted controls (thanks for including that!)

I think the UI could have used some work, maybe a simple TextureButton instead of standard Godot buttons would have been better already? The art for the player and enemies is good, background is a little confusing.

Nice soundtrack, sound effects are a bit too noisy but still okay.

5/5 for both, I really liked those aspects of the game :)

Good interpretation of the theme. Seems suited for mobile, I have a really hard time with these drag-to-set-vector games on PC.

Thanks for playing! The game also works if you access the site on a mobile, if you'd prefer; I agree it's more difficult with a mouse.

This game is challenging, you learn how to surround enemies by playing and this is very positive. Sometimes I see that the enemies attack in vain but the feedback of getting an hit (sound) was fired the same. I don't like the audio effects but this is really personal, the polish of the overall game is good enough for a jam!

Hi, I played the game and this is my review of it. The game has lots going for it like the good art, music and gameplay. Honestly, this is one of my favourites, I love how the game plays. The idea behind it is really cool. The game is pretty balanced, introducing difficulty as the player gets used to the gameplay and the customization is a nice touch. All and all this is an above average entry. Well done.

Really got hooked on this game for a while, once I figured out how to play (on a Windows PC, in browser).

A couple of notes:

I played this only my laptop so the controls were a bit difficult. I can see this playing quite nicely on a touchscreen though. The enemy trapping system is quite unique. The menu and tutorials were very clean, graphics were decent as well. Well done.

Really nice game! Iloved the game idea which will definitively work well on a phone! The music and gang flying insects with bats its just on point and I love the idea of being an elite spider. The only problem I found was being on the corners of the screen. I feel the inverted controls intuitive but on the edge of the screen you get a littles stucked. Great job!

Hey, thanks for playing and for the kind words! Another player had the same problem as you, and I don't think I made it clear enough in the tutorial that you can touch and drag anywhere on the screen to move; you don't have to touch and drag from the spider. Hopefully that makes it easier to control.

Oh! I see! of course!! i think that its difficult to not associate the spider with the controls. I'll give it a try again!

Yea, this issue didn't come up in the play testing that I did, but clearly it's a problem!

I really like this idea!  The art is cute and perfect for the style of game, and the concept of using movement to constrain and kill enemies is pretty unique.  However, the controls are really difficult to use and hold the game back from reaching its potential.  It is almost impossible to move anywhere if you get caught on the edges of the screen.  This is fixed with inverted movement, but inverted movement makes it difficult to get off of the top of the screen to transition between levels.  I honestly don't know a good solution for this, but it would be worth looking into if you want to rework the game at all after the jam.  I would be curious to see how this idea would play out with a more accurate and responsive control scheme.

Thanks for playing! It sounds like you might be touching and dragging from the spider to move, but you can touch and drag anywhere on screen and an indicator will show you the direction you will be traveling in. Hopefully that makes it easier to control.

Oh, that makes a lot more sense!  I went back and played again with that in mind, and it makes the game feel much better to play.  Glad you let me know!

Thanks for replaying and for the kind words!

ah this was so fun (and funny!) `Moths with Kalashnikovs` made me laugh. I played with a mouse on PC so I think the balance was not in my favor, BUT I really appreciated the graying out of the parts of the existing web that would shrink as your new web grew.  That was a smart touch.

Thanks for submitting this, its lots of fun.
-KPD