A thing that is also a game.
Submitted by offlebaggins — 21 hours, 24 minutes before the deadline
Add to collection 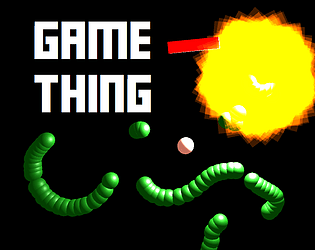 Submitted
Shooting Over It
LikeReply
JOSEPH QUESTEDJam HostSubmitted282 days ago(+1)

super cool idea. great sounds too especially when you're creating the ball/tail things. i like how they say on the screen when you restart so it kinda just gets easier the longer you play hahah

Thanks! That was mostly a feature made out of laziness haha but I'm glad it worked out!

Great! I really enjoyed this. very unique! made it 60 seconds on my longest run. Great job. Consider making a level based puzzle game with the mechanics!

The idea is cool and the gameplay also but the game lack too much polish. The explosion looks like hitbox (but seems not), Why do you use 3D, Sometimes the ball go away on the screen, etc etc...

Perhaps keep a time for polish is a good idea for your next participation ?

Cool concept, could use some polish. Very easy to surround myself and make it impossible to move. Also, I would rework the explosions, I assumed at first, that they had an area of effect, but then I realized that they only killed you if the red lines touched you. Maybe it would be less of an issue if the explosions were smaller overall? Also, the explosions are super loud if you're too close. I get that this is realistic, but it is kind of jarring.