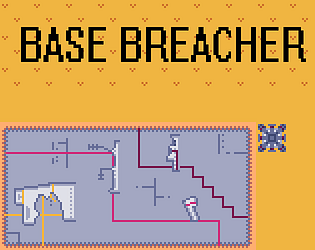 Did you work alone, or as part of a group? (If in a group, list their names)
In a group, with Toast Studio

Disclose if you used any public domain assets or not.
The font and music are public domain. Links are on the game page.

I pretty much agree with what everyone is saying. Overall, decent game, could use some work.

Have to agree with everyone's comments about feedback, and I'll add that everything having a ton of hp didn't help. That said, this is a nice-looking jam game, and the tank movement is a sweet bit of juice

Graphics was good, I think a bit of feedback to the player that you are damaging something would be good. Maybe health bars for the base and enemies. Before I noticed the base sprite get more damaged I wasn't even sure I was doing anything when shooting it.

Thanks for the feedback! You actually can't kill the towers.

Sorry meant base and the objects in your path that you can destroy. I really do think this is a great idea. You should further develop it post jam. Really dig the idea of a tower defence bullet hell that you navigate to get to the base to destroy it. Something I would want to play more of.

I think my button mashing broke the game :D Honestly just needs a bit more feedback for the player. I wasn't too sure what I was shooting was the base at first. When I saw your screencaps on Dis I thought maybe it was going to be like a maze, which might be an interesting route to go down (pun intended). You could look into procedurally generating the maps!

Very cute! I didn't actually know what I was supposed to be doing for the first few seconds since hitting the thing didn't really didn't indicate that anything was happening, but I just pushed through and managed to clear the game