Submitted by LoganChitwood — 9 days, 6 hours before the deadline
Add to collection 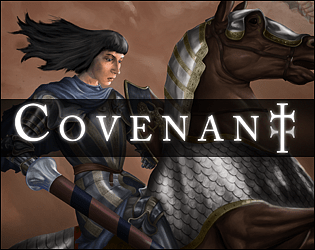 How long has this Project been going?
September 2016 to Jan 2018, as a portfolio project and senior thesis to my illustration degree.

Tried to run on my Mac Mini Late 2012 (Core i5), running High Sierra.  The .app file wouldn't run, so I entered it (it's a folder pretending to be a file , after all) and give execution permissions to the Unix binary file. It ran but was slow as molasses on the main menu. It hanged during the loading screen (eternal volleyball). Since I was running from terminal, I've got the error messages ( https://gist.github.com/TheFakeMontyOnTheRun/569bc346f2d13fbddddfb836ce58dc93 )  - there were many more.

A small note: the keyboard layout doesn't make it very clear what the inventory and run keys are supposed to be. Bear in mind that there are a lot of different layouts out there, even between countries that speak the same language (eg: I use both Brazilian and Portuguese layouts and it's astonishingly different).

Too bad I couldn't play, but hopefully this will help tracing the source of this issues.

Those loading times are crazy (regardless of the quality) but the game looks great.
The controls feel inspired by Dark Souls. Well done.

Hey Vimino, thanks, though this version won't be actively updated, as the game develops there'll be more optimization with loading and stuff.  Also, is that last part supposed to be part of this comment?  Covenant shouldn't have a file in it by that name, and I noticed that you left that comment on another game actually called "You Are Ephemeral".  Did you accidentally paste that bit?

Hello. That's understandable, good job so far.
As for that warning, it happened to several (likely Unity) games so I copy-pasted that part and eventually just stopped as it was an obvious false-positive. I'll remove it.

I tried to play it, but my graphics card isn't powerful enough I'm afraid. Judging from what I've seen you have a very high memory footprint, perhaps you can optimize so it's playable on more hardware?