Deliver food and win tips guessing the right door.
Submitted by CreativaGS — 1 hour, 7 minutes before the deadline
Add to collection 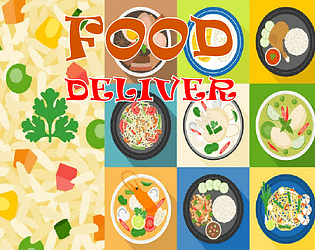 I have played the game a few times so far, both with other people at first, to have the "talk with another person reading the manual" experience, and later by myself to have a better understanding of how this feels as a whole.

I do like the basic concept of having to cooperate with another person in real life to solve puzzles, it reminds me of "Keep Talking and Nobody Explodes", but your interpretation is a very original take on that.
Plus on the implementation side, the system has a huge variety, so it always gives the player a fresh experience, and there is no risk a player might just memorise how to beat a scenario by memory.

Now on the flip side though, as I mentioned I played this game with other people at first, and none of the people I played with, myself included, could understand what the manual was trying to convey.
Now this is a common issue with board games, manuals are almost never clear to new players, and usually you must have one person who already knows the game to explain it, and only refer to the manual to look up specific rule cases.
So do not worry too much about this, but for the future keep in mind you might want to make it more clear how the info you are conveying translates to what happens in game, such as placing the door numbers in the game, or having simple drawings in the manual visually explaining the process of checking the doors in the right order against the conditions, for example.

Another critic I have towards the game as I played it, is that it seems to lack focus.
Between one door choice and the other there are small mazes, however those mazes are far too simple to be an actual challenge, there is no way you would get lost, so it more of a chore to keep walking until you are through, they add nothing to the gameplay, and they kinda take away from theme and setting since it makes no sense for a delivery guy to go through a maze out of the blue.
My suggestion would be to drop having both the door choice and the maze, and just focus on the doors but variate how that is presented through use of the theme, for example: "you are on a street with 5 buildings, you gotta figure out which building to go in through the manual, you reach an elevator and you gotta figure out which floor to go to with the manual, finally you gotta again check the manual to figure the room number at which to deliver the order".

Submitted
Heist in the Deep Mine
LikeReply
CreativaGSDeveloper3 years ago(+1)

Thank you very much for your comments and critics. It really helps to get a goal and even to make this game better.
I'm pretty sure there are lack of contents that could make this better, i really love that idea about the buildings and then inside the building, the doors, seems pretty interesting.

The fact that some clues will be on the maze to solve the door quest, should make it better improved, but i hardly had time to finish it.

I will consider every one of the points you have kindly observed for this or for another version of this and even for next projects, again, thank you for playing and for commenting!

The game premise is to deliver food to the right people, however I don`t see this in the execution. The only thing I do is navigate in an infinite "maze", in which I don't deliver anything to anyone. Maybe another theme would fit better this mechanic, as it is, it looks like the theme was forced in the game to achieve the Extra Delicious challenge.

As for the main mechanic, the idea of having a separate pdf manual for finding the right door is interesting, but it gets repetitive after a while. This is aggravated by the fact that you're not rewarded after finding the correct door.

Nonetheless, congratulations for finishing your game for the Jam. Hope you had a lot of fun doing it. Cheers.

Thank you, i wanted to add the food mechanics and more challenge on the maze.
You deliver the food after 4 passages and there is someone who recieves it, it gives you a tip and i planned to make somethin buyable.
Anyway i had not time enough to work better on the game and it's noticeable.
I am not sure if it will be better to quit or to finish it, i had fun doing, specially the randomization mechanics and i think it could give better posibilities.

Thank you for your time and comments.

If you had fun , I highly encoure you to finish it. It's an interesting idea, and a lot of effort was put in. I think it's worth to spend more time completing it :).