Use the force of your spells to move yourself around and defeat your enemies
Submitted by GreenBrayGames (@GreenBrayGames) — 3 days, 16 hours before the deadline
Add to collection 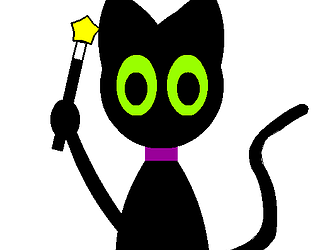 the act or process of moving through, under, over, or past something on the way from one place to another.
a specific act of traveling or passing especially by sea or air
a continuous movement or flow

I got to the flag with Zoey next to it, but I'm not sure if there was something else I was supposed to do.

I think the smaller, faster shots should've had either a vocalization without any strong attack (such as a long "sssssssssssss") with a somewhat lower volume or the vocalization you used but at a much lower sound volume. That way they wouldn't end up being louder than the stronger spells and it wouldn't be as obvious that a sound clip is being constantly repeated.

Yah the flag was the end and I was unable to build the game again to add the final effects due to weird DLL errors I couldnt fix in time.

I did have a lot of other plans for sounds such as changing the volume but the errors i mentioned before stopped that. I also wanted to add more modifiers to change gameplay but I had work so I could only work on the game for 10-12 hours total. Most of which was just level design and testing sadly.

Thank you so much for playing! Did you make a game for the Extra Credits Jame too? If so I'd love to play and return the favor!

That said, a link to my game for your convenience: https://itch.io/jam/extra-credits-game-jam-5/rate/473729