INTO THE BULLET HELLView game page

YOU CAN KICK DEMONS, OK
Submitted by Hot Girls With Broken Legs (@hotgirlbrokeleg) — 1 hour, 46 minutes before the deadline
Add to collection

INTO THE BULLET HELL's itch.io page

Theme inspiration
The theme "Passage" initially made us think of a dark, spooky hallway. So instead, we made a bright, frantic, non-stop action game that takes place in the firey tunnel to hell. Imagining the "passage" as an endless pit helped us to make some interesting design decisions: standing still is never safe!

Content info
you can kick the devil, its pretty rad

This is one of my favorites of this jam! Fast, challenging and with super-cool visuals. Great job!

Thanks for your kind words!

This was super cool to play! Really polished and very satisfying, the visuals and gameplay feedback are top notch

Thank you!  I'm glad you enjoyed it!

Everything comes together really nicely, you produced something great. Good job :)

Hey thanks! Really appreciate it!

A very polished and visually beautiful game! Faster restart after dying would be cool. Nonetheless, one of the best games of this jam for sure!

Great game! i liked the mechanic of changing walls to evade everything, and the score system. "Definitely in hell"is a great way of defining where i was hahaha i liked it a lot. It has a great design, and pretty easy to understand. Maybe you can teach the game mechanics on the game itself, instead of a tutorial. But it is just that I hate tutorials

Thanks for the feedback! We wanted ITBH to be repayable,  so not having to go through the tutorial every time you started the game by keeping it separate felt necessary.

Awesome game! So much fun! One minor suggestion, it would be nice if that thin line  you see when you dash was on all the time because I keep losing my character. I know the white dot on the side is for that, but it is outside of the action so I lose that too. Great work!

Thanks for playing! You can hold 'Space' to keep the white line as long as you want! (though, you have to dash when you let go of Space..). When holding space, none of your other movement options are restricted either, so you can ascend/descend freely.

Keeping the player distinct while keeping the artistic vision in tact was a struggle throughout the entire development process. It's not perfect,  but it's a lot better than it was early in development.

Oh fantastic! That is exactly what I was looking for!

I really like the game, it is fun just to play around with when there is nothing else to do, and I would definitely play this if it was an app. I did notice delay's every now and then when dashing, and sometimes the game slows down as well, but the game itself is great!

Hey, thanks for playing and giving feedback! The delay when dashing is intentional: we put a lot of effort in to making the hits feel really meaty and crisp, but we obviously overdid it a little bit on the dash-kick. The game shouldn't ever really slow down though, so that may be a performance issue related to WebGL.

There's a very noticeable delay every time I try to dash that makes it impossible to attack some of the skulls without getting hit, in part because it seems to be bigger right as they're about to shoot. On top of that, if the character gets hit, right after I push the button, it seems to result in the same visual feedback as if I hadn't pressed the button at all. I also can't tell the difference between letting the character fall and pressing s.

At the start of the game, there seems to be text at the top, but gets cut off by the top of the game area. My resolution is 1366x768 in case it matters.

Despite the frantic gif you put for the cover art and overuse of particles each dash, the game feels slow. There's a lot of waiting for the skulls to not have shots blocking the way, especially the blue skulls. I played until I got to two blue skulls at once, and stopped because I was tired of waiting for a safe shot.

The tutorial calling itself "hand-holding" seems like it falls in the category of derisive naming that Extra Credits has discouraged in its videos. It also doesn't feel good to have the tutorial wait till after something bad happens to give instructions. I don't see any other listing of controls, either, so I'm not sure what alternative the game is expecting.

Lastly, your descriptions all mention kicking, but the character dashes.

It seems like there might be some problems with your browser or machine if there's a noticeable delay on the dash.  It should be instantaneous and on the 6-7 or so systems we've tested on, there was no delay.

I'm not sure of your monitors specs but we did set our itch page to play in fullscreen by default, though it doesn't seem to be true fullscreen. I'd recommend hitting the fullscreen button in the bottom right of the WebGL player. It should fix all the cropping issues, though it seems like itch just may not scale properly to any monitors other than a 16x9.

The game eases you into the difficulty, and if you saw the two small blue skulls that would've put you at level 5 or so of 20. It gets much more difficult and fast paced as you go.

We chose to keep the tutorial a bit more lighthearted against the backdrop of the dark themes of the game. The point of waiting til after something bad happens on screen is so the player learns to associate the sounds and visuals of doing something wrong before they get into the actual game. There's no way to die in the tutorial so, this really cements good/bad actions while having a bit of fun with the player.

Also, the character is definitely kicking ;) 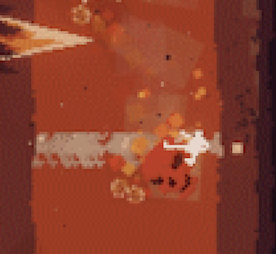 This is definetly a great game, short story big plays.... you have everything! Add a gamification part like a shop and money (souls or something) and it will have everything to be a smartphone "Most played". Really awesome! Nice job!

Thank you! We definitely considered mobile/mobile games as inspiration when making it.

super cool!!! feels really satisfying to play. I got to level 12 of hell.

Thanks! And well done, but there's more levels to go!

Thank you! Maybe we'll update the demons with nice butts so we can get the sex appeal Booty Cruise has!