This is a rebuild of Multi User Dungeon for two players.
Submitted by micha31r (@micha31r) — 4 hours, 22 minutes before the deadline
Add to collection 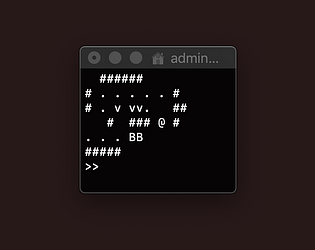 So.. you took second place! Congratulations :)

We at the guild aren't aware of who you are, though. We'd like to arrange for prize sending, though, so if you could contact us on the guild slack (https://slack.mudcoders.com/) or email mudcodersguild (at) swiftausterity (dot) com we can work that out.

Took me quite a while to get this running locally, but once I did this was a lot of fun! :)

To play in single player comment receiver() and sender() in the while loop at the bottom. (still type yes for hosting)

I really wanted to try this one, but alas I can't get it to run (you need Python3 btw, it's not mentioned in the docs): Possibly because I don't have another IP easily available with the appropriate ports open. Unfortunately you can't give the loopback IP (so you can try to play against yourself on the same machine). You end up with a blank screen with nothing happening, which I presume is the system waiting to find the other player.

I even made a small attempt to remove the other-player code to at least get something to test - but couldn't get it to work in the short time I played around with it.

I think this is an ambitious effort though. The code is pretty easy to read  and I like that there are comments in there. Pretty nice to be able to distribute it all as one single Python-file too. But beyond that, yes - as the author says, the code style, layout and game architecture could be improved a lot.

Here is how to test it in single player,  comment receiver() and sender() functions in the while loop at the bottom using # then run the game, it should also work in python 2 when it asks for hosting, still type yes , but the IP address part doesn't matter since the game is not going to make connections.

You can't run in Python 2 (at least not with these instructions), since you are using `insert` to get the IP/is-hosting info rather than `raw_input` needed in Python2.

I tested the game now, both by starting two terminals and by commenting out the sender/receiver functions. I can move around. It would be good if you put the keyboard commands in the intro text (I found wasd and by reading the code I figured out you had to press Space to use the sword).

Interestingly, if you don't explicitly write "yes" at the start prompt, you'll still get into the game and can walk around (I even up in a battle with a blob) but you see no enemies moving and no other items moving on the map. Once I wrote "yes" it works. Looking at the code, this is because you are literally using 'yes' as a check later in the code. While this is not a good idea overall, you must at minimum validate user input like this and abort the game if the user didn't input what you expected!

Once I got it running by explicitly entering 'yes' , it works ok though. Mobs are tough and fast!

I see your game loop catches the `KeyboardInterrupt`, but using Ctrl-C didn't work for me on Linux; I have to kill the entire terminal to exit the game.

Finally, what M.U.D. are you referring to when you say that this is a "remake of M.U.D. for two players"? MUD is, well, a MUD. This plays more like Rogue or Moria ... Not a big deal, but the reference confused me.

I figured why it didn't catch KeyboardInterrupt, the second(nested) exception catches everything and just continues the program.