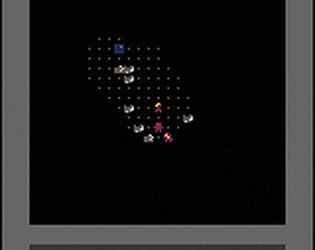 This is a really cool game and I love the sound track. I love how you can only use items in combat giving a really tight risk/reward feel.

I won! This was awesome!

At first, I found the “only use potions in combat” frustrating, but I theory crafted it as the enemy’s attacks showing you how to cut harder or dodge better and got over it. Venturing deeper into the cave to fight more and more intimidating creatures and then growing in power (over 50 ATK 50 DEF) and slaughtering everything was an incredible arc. Fog of war was a great choice to give mystery to the cave and I love the readability of the enemy design.

I died several times before I figured out how to balance health loss with “learning” so I could buff my character up. At first, I was trying to get potions and retreat to easier enemies, but I think once I figured out how much a chicken got me and kept an eye on my hp, it was smooth sailing (but my rampage was still engaging).

I didn’t pay much attention to enemy atk/def values to calculate how many hits I could take – my formula was initially stay above 1 and after some maxhp became stay above 8. I wonder if getting hit for 4 damage would make the game more interesting or overload me with math (presumably that was possible, but my def got up fast enough that I don’t think I lost more than 2 in one hit). I guess it would have been welcome towards the end.

Well done! One of the most impressive jam games I’ve ever played.

thank you so much for the kind words!

my main concern when I decided it was time to be done and submit was that it was too easy to become OP and steamroll the second half of the game. but I guess I didn’t realize 1. how much I knew about my own game, not needing to learn hardly anything through trial and error, and 2. how fun it is to learn, master, and then rampage through a small jam game that you’re not intending to play for hundreds of hours

I’m really happy to hear you liked the arc :)

I died in this way faster than the other game with "You Die" in the title.

So glad this one made it in! I've not played enough yet to find my rhythm, but I'm keen to keep exploring and discovering!

The way this game reveals itself is very pleasing. Reminds me of the alpha Desktop Dungeons in a way (possibly concrete, it's been a while) and has a similarly compelling draw to it.

thank you!! it’s hard for me as the designer to have a sense for how people experience it, since I know exactly how it works already, so I’m glad you enjoyed it! learning the game is probably my favorite aspect of playing roguelikes :)

Super addictive! Really hard at first but once I figured out a winning strategy I made it through to the end. The lack of inventory outside battle was frustrating at first, but I came to see it as part of the puzzle to strategize around and began to enjoy it. I do also like how you can just about escape the enemies by maneuvering round the maze.

I’m glad you liked it. that’s basically exactly how I feel about the item usage restrictions too haha – annoying, but once you accept it, fun to strategize around. thanks for the kind words!

I thought I was just going to give this a quick test but it really pulled me in. Once I understood the attack/defend mechanic and started to recognize the different enemies it got a lot more strategic. I played several games and only managed to get one piece of light so far but I'll be coming back to this later for sure!

I wish I was able to heal or apply potions outside of combat in some capacity, or at least be able to view my inventory to decide if I should attempt an encounter. I found myself avoiding more difficult enemies often because I wasn't sure if I had a smoke bomb, or I didn't know if I'd be able to heal going into the next fight before I was hit with a killing blow.

thank you! good points about the inventory– I like the mechanics of it but I can definitely see how it could be frustrating as a player… I’m glad you’re enjoying it!!

Went back and played some more with the volume a little louder and the music felt pretty chaotic. My first time playing, the attack effects seemed to stand out more but when you can hear all the music clearer I think it drowns out the reset of the sound blurs the line between an effect and the music. Still just as fun to play though!