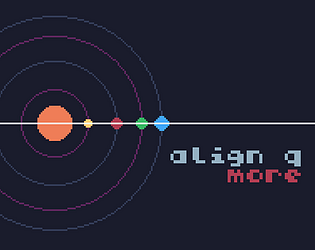 Cute little game. I included it in my Sim Jam compilation video series, if you’d like to take a look. :)

Thanks so much for featuring my game in your video, that’s awesome! It’s very nice of you to show it at the very beginning of the video as well.

There’s actually no next level, after aligning planets you just get a success screen and you can press Z (or A button on the Xbox controller) to restart the game.

I get that the game can be difficult, very few people have actually completed it. That’s why I included the possibility to switch to 3 planets to make the game easier. A small tip to make it trivial: if you accelerate the green planet its speed will be almost identical to the red one. That way you can align green and red, and then align them with the yellow. :-)

I like how simple it is yet still fun to try and get the planets to align. Could use some relaxing music to align to.

Great job, way to nail the theme too!

Thanks! What’s funny is that the game wasn’t even originally created for Sim Jam, it just so happened that it perfectly fits the theme.

I will add music to the game, I just need to learn TIC-80’s music editor. And how to create music in general… since I never did that. :-)