Small Super simplistic survival game with a small message
Submitted by dabt0402 — 1 day, 22 hours before the deadline
Add to collection 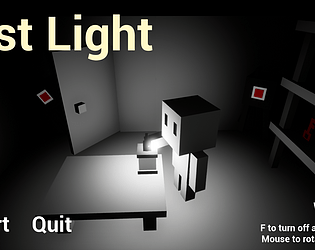 Astonishing how much atmosphere this squeezes out of the untextured block graphics! The monsters are funny but it's a bit punishing that you die once you touch them. Also would have been nice if they made some kind of noise as they come near, cause sometimes it can feel like a cheap death if you're caught from behind. Otherwise, pretty neat experience!

Submitted
A Boi And Their Bat
LikeReply
CameronHowellSubmitted314 days ago

I enjoyed that a lot. Keeping everything consistently simple is a great idea for a jam. You did this very well

It's basically a great concept, very simple, but very effective, testing your imagination for level creation rather than pure concept creation. The Graphic style is very consistent, the lights are well managed, I love the style of your enemies, the main character is also in the theme but since he is the key element he would benefit from standing out more. The fact that the enemies only move when we move forward adds a very interesting strategic aspect. However these last ones have some problems of movement notably with the few obstacles and door, from time to time the enemy waits just behind the door, when it is a piece without other exit, it is the immediate defeat, perhaps it is a functionality but I find that a little shame). Another little detail: The lantern loses battery over time in a linear way, but as the entity moves are waiting for the player to move, it's a shame that it's not calculated only when the player moves forward. But here again it's purely subjective, and it's a bit like the strategic aspect. Apart from all that there are some camera problems when the pieces are too small, but nothing dramatic! :) (especially in level 1, where the key is located, I didn't see it 3 times, I went around in circles, tried to make a little card until I realized that the key was indeed there ^^')

But nice project, very promising in case of lawsuit :)

Final: 8.5 (For me)
Good continuation

Thanks for the feedback, if i eventualy keep devolping the game i'll take this into consideration,
Also what do you mean with "very promising in case of lawsuit" lol

No problem! :) Okay perfect ! Ah yes, I wanted to say that it has a very interesting potential if you continue the development :)

i loved it, it has a lot of potential, but one thing while i was playing was that if you were followed by a monster and went though a door they would stay there and basically lock you into the area, you cant leave or else you will instantly die, it happend to me 4 times