Very short retro dungeon-crawler for a jam
Submitted by BLOODBATH — 5 hours, 22 minutes before the deadline
Add to collection 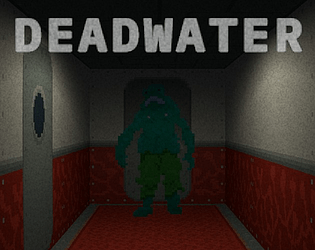 Really like the atmosphere and looks here. Great ending.

Indeed, even simple animations would improve this a lot. Visually distinguishing openable doors a bit more would be also great.

Well, I played it 8 times in a row to see if I could get a 2nd ending. Is there a second ending?

What can be improved:

What I wished for:

I liked it enough to play it 8 consecutive times ^^ and as I stated, I like the aesthetics and the mood of the game well. I even waited for 10 minutes to see if there is something after the last credits ^^. I would love to see this setting in an extended scenario.

i thought about adding a second ending for getting those last few kills but figured an alternate ending would be too weak compared to the current one without having some more time to work on it. that room before the end just serves as a distraction for the boss to disappear and set up the end sequence.

i planned on having a couple more enemy types and tile palettes for an upper and lower deck area, but between my inexperience with pixel art and having the balancing crisis that i think a lot of us had i cut scope quite a bit. not sure i'll get around to adding it all back but i'd at least like to add a linux build and speed up movement maybe 10% after the jam.

Great vibes. I think an attack animation could help. Thanks for the game.

Yup - I liked this one. a bit slow (speed wise in movement). But the general look and feel is spot on.

I loved the look - it really captured the old ship vibe - great work :)

so, i got scuttled a few times.

but i just tried to power through the enemies, as i didnt see any alternative.

i didnt get around to finding a way to much bring attention to it, but the stats on your hud are very important as you have to look for the best damage value per level up. each level up refills your health but monsters dont regen. you can also go through any door with a handle on it.

Submitted
Incursion of the Night
LikeReply
DamienDeSubmitted291 days ago

Another one, with greate atmosphere. I liked the cthulhu esque monsters and the pixle art. But qhile maybe deliberate, the sloooow movement grates on my nerves a bit.

The game oozes atmosphere if anything, and was kinda fun to solve.

Submitted
Incursion of the Night
LikeReply
steamknightSubmitted292 days ago

I love the theme and the subtle... "fisheye" lens effect. I wish the movement was a little faster. Congratulations on your jam entry!

I enjoyed this game. It was short, sweet, and I loved the aesthetic and music. I thought the sound effects were bizarre and they slowly grew on me. Although gameplay was slow, I found myself speedrunning by rapidly tapping the movement keys. Awesome game!

Submitted
Planet of the Beast
LikeReply
zooperdanHostSubmitted292 days ago

Nice atmosphere but way too slow movement. The graphics works well enough and I kinda like the traditional roguelike combat of just moving into the enemy.

Submitted
It Came from the Forest
LikeReply
SadSmileGamesSubmitted292 days ago

A bit too slow for my test, but I appreciate the horror vibes.

Quick and cute experience. Feels a bit like you gotta "solve" it, because you need to tackle the mobs in an order so you level up appropriately. The ending was unexpected!

A bit faster movement would've been lovely though.