Submitted by WSP_Bellecour — 47 minutes, 11 seconds before the deadline
Add to collection 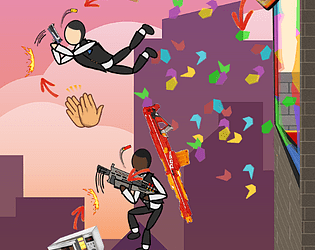 Hey dudes, you made a good game during this jam, good job.

For this test, I have played alone with my keyboard --> HELL

But I have succeeded all level by the power of god

And now such as all of the game made during a jam, it's time to tell your bugs.

-The bride is twinned sometimes when you drop her / The bride can be blocked in the decor (sometimes between two colliders) / Sometimes bride movement seems really strange !

-One time with the black guy, I have lost my weapon without reason / sometimes, when I shoot some enemies, characters have a bonus of speed --> Is it a mistake or real boost ? no feedback if it's the case

-At the end of a level, where we need to pass the bride to a player than another again and again (with an image to teach this movement). If I just run beyond the car, the level hasn't ended, but we haven't wall too, our characters just walk in the void :3 / You have some problem of colliders / I haven't found the car at one level, I don't know if it was me or your level that had no end ?

- Your back button in the credits doesn't work well, try to patch this because to use it, the player need to spam every where on the sprite and the button quit is Under the back button in the next screen. By the way, this time it's just my own opinion, but I need to tell you. You generic suck T.T

But in despite of all that bugs, your game is really fun to play, for me, good point are :

-Your LD was good and adapted to play with two players, I didn't have a feeling of repetition

-When you end a level, juices feedback are well made and to conclude, the end with a little recap of your score is welcome.

But if I could, I think you would have a general mark between 6 and 7, good job guys !

Submitted
Message in a bottle
LikeReply