Submitted by iibiim — 2 days, 13 hours before the deadline
Add to collection 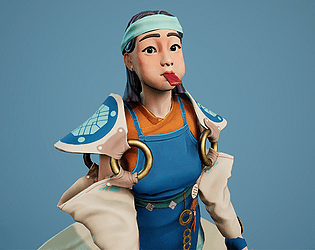 re-posting feedback with spacing, hopefully this is a bit easier to read through!

I love the concept you’ve chosen; It’s quite a unique character so it’s great to see that you’re being really ambitious tackling such an interesting design. It’s clearly given you a strong starting point and enabled you to dive right in and get to grips with the pipeline, without getting too held up on the initial ideation phase.

The final character has a lot of personality which has clearly emerged from a number of decisions throughout development that are supported by good research. Creating a basic narrative for your character really helped to inform choices such as pose and presentation that has led to a successful final result.

Good amount of research with some strong reference images to inform things like anatomy, clothing, and props. The props fit really well with the theme and add a lot to the original concept supporting your narrative of a family business. Very nice solution for the back of the clothing which feels in keeping with the original design. I especially like that you chose to tackle some expressions for your character which help to reinforce the personality.

Perhaps some evidence of further concept development, such as rough sketches of your poses/final scene could have been a nice bonus and helped to inform the final renders.

Overall you’ve demonstrated a solid understanding of the character workflow making use of industry standard tools and processes. Overall I’m really impressed with your toolset for this project.

Fantastic to see you using marvellous designer at this stage. It has clearly given you a solid base to develop further in ZBrush.

Overall the game mesh is of good quality, with a suitable polycount that supports the style of the character. Some areas feel a bit uneven such as around the mid-section, try to maintain clear gridded evenly sized/spaced quads across the model where possible. Shorts/hips are quite low density compared to the rest of the mesh, could do with a few more loops here to support deformation. UVs are packed efficiently making good use of texture sets to separate skin from cloth etc.

UV’s for the head could be improved further to give more resolution to the face as currently the UV’s here are a little compressed and are sitting in quite a small portion of UV space. You could enlarge the potion of the UV island where the face sits with soft select, don’t worry if sides and back of the head take a slight hit in terms of stretching and resolution drop as the facial features take priority here. You could even experiment with giving the face its own UV tile and texture set in future.

Skinning looks successful considering the potentially tricky areas such as the shoulder/forearm connection with solid metal rings. In future don’t be afraid to ‘cheat’ in order to create a more dynamic final pose. This could be achieved by taking the posed character into ZBrush to transform the pose further manually, or even something as basic as soft select in maya to push and pull areas around that aren’t responding as desired with the rig alone.

As a character artist you most likely won’t be responsible for rigging in an industry setting, so you can get away with ‘cheating’ your character poses for your portfolio in order to create the most interesting/dynamic result. The fact you are showing a solid base understanding of rigging and skinning is a huge bonus and will add a lot of value to your skillset.

Good material set up in engine and great use of packed textures. It would be great to see you experimenting with material instances with parameters in future. Most often a tech artist would be responsible for shader set up in industry, but it’s still important to have an understanding of the material workflow in unreal.

Material thickness and cloth treatment feels appropriate and innkeeping with the visual language of the character. Strong cloth exaggerated cloth folds are reading very well. These details can be difficult to balance when working on a more stylised character so great job.

I really love the treatment of the hair especially the hair though I feel the ends/base of the hair could benefit from a more interesting natural shape and taper. The end result is very straight and level at the bottom, whereas something closer to the hair in the concept with a subtle flow and kick out plus some flyaway hairs may have worked well here.

The overall silhouette of the character is really interesting and successfully captures the forms present in the concept.

Texturing is very successful overall. I like the treatment of the skin which has some life in it without taking away from the stylised look. Really nice use of gradients to ensure the textures don’t feel flat and nice use of baked lighting/AO pass in the diffuse texture to help create depth.

Absolutely love the poses they have a lot of personality! I like that you’ve chosen to create two unique scenarios that tie into your theme, showing the different sides of your character. I love the contrast here between the proud ‘serving’ pose, and the relaxed ‘On break’ pose. My only feedback here is that I’d love to have seen the poses pushed that little bit further with more dynamic gesture and contrapposto. The arms feel a little squared off and are held quite close to the body. Perhaps raising the arms and breaking symmetry could help open up the pose, whilst maintaining the large presence of the shoulder pads. Because you’ve done such an awesome job creating a strong personality, I’m dying to see a more energetic pose capturing a bit of motion to really sell the identity of the character. Fantastic job overall though!

I love that you took the original concept and developed it further by creating a narrative to help inform your characters personality and props etc. Great to see you being realistic about your scope by leaving out the crab cart and instead focusing on the quality of the final character.

Some good research on top of the original concept in to help inform each stage of development. The reference/mood board is concise and tailored to the concept helping to maintain a clear focus throughout development.

Starting with a super basic block out helps to achieve a quick idea of how each element is working together, I’d love to have seen something like this in your document. The rough 3D block could be taken into a 2D programme to paint over in order to quickly iterate ideas on the silhouette etc. This block out stage can be useful as it allows you to solve problems early on in development.

Good evidence of workflow. Each stage in the process presented clearly with notes describing specific challenges met and how they were overcome.

I love that you showed the various versions of the head sculpt as you’ve clearly taken the time step back and re-evaluate your work at certain stages, looking to find clear reference and try again resulting in a great outcome.

I especially liked seeing all the patterns and alphas that we’re created for the clothing. Clearly a lot of work has gone into the creation of this character and it’s great to see you showing off every aspect of it as it.

Tools list is clearly highlighted giving a good summary of the pipeline which is consistent with industry standards.

Project has been well evaluated touching upon lessons learnt and areas of potential improvement. Great to see you talking about potential weak spots in the project and how these could be worked on and improved next time. I’d love to hear where you may go next with your learning journey. It would be awesome to see you taking part in next year’s SFAS challenge as you can use it as an opportunity to assess your personal/artistic development.

Final presentation is extremely successful. The character is cleanly presented with a strong lighting set up. It’s great that you’re experimenting with different background colours to find the most appropriate one. Perhaps a slightly darker blue tone could have helped to keep more focus on the character itself, but the final result feels really appealing and pleasant to look at!

One suggestion for the lighting is to bring in a stronger rim light to help highlight and reinforce the silhouette of the character. This would also help to break the character away from the background swatch adding more depth to the scene.

I like the variety of beauty shots you’ve assembled with a number of wide shots and close ups. The A-Pose turn around image giving a clear overview of the character from every angle.

Final renders are well considered, and number of images is concise keeping in mind the ‘less is more’ mentality. This is great for your portfolio as often times reviewers won’t have much time to look over your work, so keeping the renders concise and to the point helps to give a quick and lasting impression without overwhelming the viewer.

Overall, I think you’ve created a great piece of character art demonstrating a solid understanding of the pipeline. I look forward to seeing what you do next, keep it up!

Feel free to reach out to me if you have any questions or would like any further feedback on your project.