Join Princess Boof on an adventure facing well-equipped enemies with a handful of your very own non-swords!
Submitted by Code Junkies Studios (@CodeJunkies_), gemhunter178 (@gemhunter178), Cam (@n0t_cameron) — 14 minutes, 32 seconds before the deadline
Add to collection 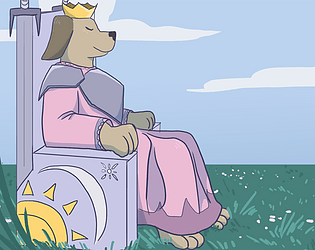 Music was great!  My suggestion would be to turn it down a tad as it overpowered the dialogue at times.  Our game's music was similar to your's btw.  Hope you'll check out our game too!  https://itch.io/jam/cgj/rate/476728

Good entry! I'm sure if it was more developed it would be awesome! There are some little issues I found.

Apart from that, very decent entry! Congrats on submitting it less than 15 minutes before the deadline!

If you've got some spare time, come try and rate mine! you can find up to 7 endings and a hilarious narrator will guide you!

Good job guys with this game :)

Fun! Could be a really cool game once fleshed out.