A game about backing trucks.
Submitted by chrisbyte (@chrisbyte) — 11 hours, 16 minutes before the deadline
Add to collection 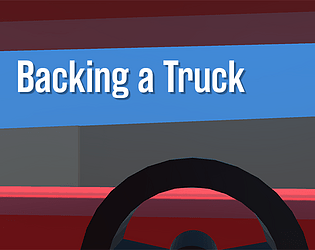 Hi! :D Your concept for the game is very creative and funny! Your voice over was also great! I blindly followed the instructor a few times when I forgot about the game jam/lying aspect of the game and ended up crashing xD Hahahaa oops ^-^'! Fun game, nice job :)!

Hi, so i played the game and now im gonna comment about it. Lets start of by saying i felt like i was playing csgo with maxed out graphics on a potato. The mouse sensitivity was so damn high and i don't know why you multiplied it with fixed time lol. And my laptop is pretty high end not frame drops. Not to mention the game doesn't fit the jam theme. The graphics are so low poly. It looks like you had the basic shape down so ill you really needed to do was to smooth it out with subsurface division or smthing (this is available in blender). Anyway not to mention that the game levels are pretty hard. Now, i dont wanna discourage you or anything i'm giving an honest opinion. Hope you keep this in mind. Cya!

Thanks for your feedback! The simple graphical style was intentional. The theme came in through the "helper" who is supposed to be guiding you into the park but is lying to you about which direction to go and if there's enough space behind.

Not discouraged. Not all feedback is positive. Glad to hear all opinions. :)

Others have already shared my opinion to you I guess. Keep going!

This was pretty fun, but some things were unnecessarily difficult I think..  For example, at the start of a level, there is no way to tell where you're supposed to be going. The overview shown when you crash was really helpful though and helped me understand the level. Maybe show the overview before letting the player play?

Also, it was pretty much impossible to judge how much room I had left behind the truck which led to crash after crash which was frustrating!

The voice over was pretty funny, but I ignored it completely.

Submitted
the plane is a lie!
LikeReply
chrisbyteDeveloper141 days ago

Thanks for your feedback. The difficulty could do with some tuning, but I feel its part of the risk vs reward. Do you inch a bit closer and risk crashing or do you shut off the engine hoping your score is good enough to pass the level? Each "run" is over fairly quickly so I feel its not too unfair on the player.

I had a stretch goal if I had some spare time, which was a gps display (which would be lying to you of course), but would at least give you a overhead view of the level.

This is so charming. Love the voice overs!