You are a blood cell, defending the body in this bullet hell where time is relative
Submitted by flavedogame, Sapient44, Dieck, Sealcat — 17 hours, 23 minutes before the deadline
Add to collection 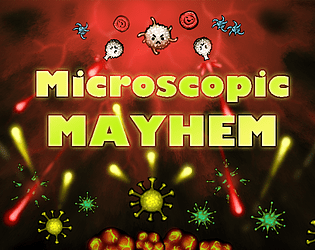 How does your game implement the theme? (If your game doesn't use the theme ignore this field)
In each level you need to achieve a goal in less than 10 seconds (but time is relative here).

What was the size of your team?
4

Please credit the resources that you used during the jam (if you used any)
Bullet generation: https://wayfarergames.itch.io/bulletfury

That's the first game in this jam that made me learn biology!

The concept of time slowing down feels really good, I like this game! The slowing down gives you time to think about your next move while still being challenging. Also, making every stage with a different purpose or a different cell made the game fell refreshing and unique.  After finishing many stages, I felt  like I want a bigger challenge with the same mechanics so maybe adding a boss stage or something like that could be good.

Overall I had a great time playing the game!

Really interesting mechanics, although it took me a while to notice how the time works. I really like the visual style of the game.

I really enjoyed the strategic pause and the fact you implemented a leaderboard made the game more competitive. Liked every kind of cell, but I would have liked to play a bit more like the wound sealing one since the parallel movement mechanic is really fun to me as it is tricky

Really nice game :) Interesting concept, solid controls, and goals are explained well to avoid confusion. I also like the time slowing while not moving mechanic. I could have used that idea while making my game ^^

Great concept, the minigames are great, polished and really fun

This is so cool, I love the fact that it's actually based on the real things, one small thing I noticed that when spamming left mouse button to move, sometimes timescale behaves really weirdly.

It's just soooo unique I love it! It definitely has the potential to be a full game!

Awesome game! Everything is so well done that I honestly don't know what to say. I love the tie-ins with actual science—this could totally be something to give kids to play to help them remember the different types of blood cells and get them excited about learning bio.

Unique mechanics and main idea! It's really well executed, and the fact that this is a submission for two jams is really mindblowing (quite genius actually). I just hoped that there could be a more interesting twist to the Bullet Hell Jam theme other than the time of the stage, but the game is still good. Appealing art, nice SFX and overall satisfying. Keep it up!

I love the variety in the different levels, it was really well thought out.  I also like the timer mechanic, i'd seen a similar type of game done for the 7DRL and the mechanic of small movement hops and time freeze works really well.  Something i'd like to try in the future too.  Great entry!

Really solid submission! The variety between cell types was fun and they all had different enough playstyles to make them feel worth separating. At first I thought the platelets were going to be problematic, but even they felt well balanced. The only thing I would change is the cell type prompt that shows up each time the level starts. Initially it was helpful, but after a bit it felt like more of a disruption to your gameplay loop than anything else. Having the option to skip that phase would really smooth out the transition from one section to the next.

Submitted
Panic in the Dungeon
LikeReply
FoundTexasSubmitted1 year ago(+2)

As I told to the guys in Chrono Contol, this y a very profesional game and might get the best ratings at lest for me is a solid 5/5 very fun and easy to get into.

Thank you for your words

It's remarkable how much you squeezed out of those minigames! Most things feel polished, the idea is simple, clever, unique and well executed. The music sets a nice atmosphere that suits your artstyle perfectly. Great entry!

Pretty fun and an interesting mix of concepts with the "Superhot" style time , i liked the variety even if on the first time encountering a different gameplay phase it can be hard to adapt, but once you get the hang of it its super fun, i like the mouse only gameplay, and i also like the artstyle with the cells having little faces and all :p

Didn't score all that much but i had a good time, well done ! :)

Very impressive game considering it was made in a week! I love the theme going on here, where you're controlling different types of cells with their own abilities and win conditions. It keeps the game from being repetitive. I also like the different enemy shooting patterns, it really does make the game feel like a bullet hell. The white curvy bullets are especially fun to dodge.

I would increase the visual contrast between the walls and the background more. They're really similar in color, which makes it hard to tell when you're near a wall. It's especially a problem in the stage with the moving walls. Some levels are also considerably more difficult than the others (looking at you, platelets), so I'd considering some rebalancing in that aspect.

Overall, excellent game. I spent a while playing it and getting a high score.

Thank you so much for the detailed feedback. We will keep in mind ours walls and difficulty problems.

Surprisingly educative! Played a bit but I already learned a lot.