#Wearmasks
Submitted by plutoprogrammer — 1 day, 12 hours before the deadline
Add to collection 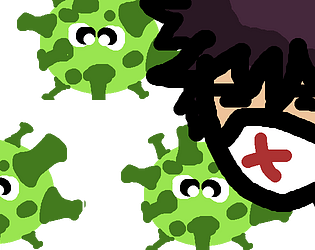 Please credit the resources that you used during the jam (if you used any)
Unity Game engine.

Libre Sprite for the art.

Credit all team-members that worked on this project (you can link itch.io/twitter/youtube/twitch)
https://www.plutoprogrammer.itch.io

This is a fun little game with very topical theme! I loved the detail in the rooms and the ambient sound set the mood nicely (how i feel every time I go to get groceries).  I didn't realize the viruses would keep spawning so i stuck around the same room for a long time.  The viruses screaming sound got a bit loud when there was a ton of them in a room. But overall this was great! Nice job!

A fun little game with nice visuals. Things I don't like about the game are that once you start the game there doesn't seem to be any way to pause it/close it, that it isn't explained that you're supposed to go somewhere and that the sounds are a bit too loud. But overall a great game, especially given the short development.

The visuals are quite nice! But be more careful with the SFX, the sound of each individual virus adds up at the start of each room, making an extremely loud sound.

The gameplay was simple, but fun enough. Overall a solid entry.

That's looking really cool for a game made in 10 hours.

I liked all of sprites, especially the virus one.The VFX are great too, adding eerie atmosphere to the game.

There's some things I would like to point out:

There was alot of enemies spawning, but they was dealing small damage, so I think it would be better if they had longer spawn cooldown and bigger damage dealt to player, or just player had less hp.Also, boss had few hp, so you can either make him tanky(lot of hp), or add some hard attacks in the future.

If not counting things that I typed above, game is really great, I hope to see more updates after the jam ends

(Also, if you could do one thing to make the syringe rotate around the player rather than a certain point(It's okay if you don't like that idea))

very nice for that small amount of time you put into it. good job.

aus lehan said i  would also prefer to let the player shoot when holding the mouse button down. (with a small cooldown)

I only have two tips:

1. (which is a problem I have in my game as well) sound is too loud, I'm referring to the covid sounds.

2. (More a personal preference) I'd make the player shoot by holding the mouse button down instead of making him click it for every bullet to be spawned

Respect, for a solo entry done in 10 hours  at your age :o

I like the use of lighting for atmosphere, and the covid sprites are funny with their googly eyes.

Just some small issues i'd point out but nothing much really, the game doesn't make it obvious at first that you can move around to different room in the hospital, so at first i thought it was just an arena untill i saw the gap in the wall, the weapon is fine but i feel it would be better to have it auto shoot when maintaining the click instead of spamming it, and last sometimes in rooms where there are a lot of enemies their sound can get a bit loud, but that's about it and like i said these are some rather small issues plus gotta take into account the jam's deadline.

Anyway, good job and keep at it :)

Thanks a lot. These issues are being said by many.  I intend to fix them after the jam ends

No problem, your game your vision :)

Hope I am not rude. Thanks a ton again

Man 13 years and doing a Game Jam Game in UNity in 10 hours. Mad Respect. I like the pixel art, the Sound was quite okay. It was not that obvious you could move out of the room to get to the next "level" - but the Moving Controlls felt good, and shooting Covid was a lot of fun. Keep at it, you can be proud of this one.

Thanks a lot. I hardly thought anyone would see the writing about age. Thanks a ton again. Please suggest new ideas for the game☺️

We played your game on Stream, you can check out the VOD if you like:
https://www.twitch.tv/nahro1001

Yeah seen it. Thanks a lot again

its a nice game, liked the graphics and theme, but its a bit short and easy, the virus dont deal much damage, so i could easily run until find the boss.

Thanks for the feedback. I will be fixing them after the Jan end s

Cool game. The lighting was cool. Although, it was a bit short and since you have so much health it makes it very easy. Well rounded overall

Thanks for playing. I will try my best to fix the silly glitches.

It's a fun little game! Movement is nice, but if the vaccine could auto shoot that could make it better. Audio is really, really loud when enemies are stacked. Health is also too large, there is almost no risk in the game. Very short but very nice!

Thanks a lot for the feedback. I am recieving quite a lot of reviews about the player health. I am going to fix that.

As for the auto shoot, I don't enjoy that much but I will make it optional .

Normal game. I'd just like to make the weapon a little smaller.

Nice work! I thought it was fun and I enjoyed the theming. Gives me hope that COVID will end. A problem I experienced was that it was too easy to accidentally move between the rooms (especially backing up into the room you just came from).

At the early play test of the games, even I had the room switching issue. But I did not get how to fix it. I have now got some ideas. I will fix it after jam

Not bad, though the screaming of all the viruses at once when you enter a room is a tad overdone :P

Definitely too short and I got tricked by no walls on the sides, so I thought I can go to left and right, it should be more clear.

And you can use an autocliker for *insane* firerates :P

Yeah first time when I playtested the game with my head phones I nearly had a heart attack :P  I forgot and I mean I literally FORGOT to add colliders in the boss. AAAAARRRRRGGGHHHHH!!!! Well I can not edit it now cuz the rating period started. And I could not think of new levels during this short time as I had to cope with my school work as well. As for the clicking...well I kinda get annoyed when i cannot shoot whenever i like. So i removed the timer. Now i realize it was a mistake :(   ..    Thanks a lot for playing and giving me so many valuable feedbacks! And still your game is my favorite so far..

Nice theme! The lightning really adds a nice touch to the game. I think some extra types of virus would make the game feels even more fun to play. Overall a decent game!

Thanks for the feed back..specially about the virus.... The next update will feature a ton of new stuff and levels..Planning to change certain visuals as well.

Hey that was fun to play.. the pixel art of the Virus was really good... I also liked the concept of Virus & the injection ...

Thanks a lot for testing. This is my first time. Suggest new ideas, also mention if there is any problem with the game. I'll try my best to fix it

thats great... you have made a very good game...

please consider trying my game when you have time:

Your game was quite fun. I rated it :)