The Blockchain of EliView game page

Bring sticky justice with a block attached to a chain!
Submitted by stofStorm — 14 hours, 22 minutes before the deadline
Add to collection 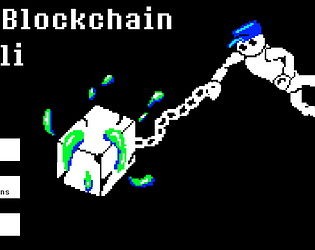 The Blockchain of Eli's itch.io page

- The blockchain only being able to hit up, you end up regrouping enemies, going down to the screen then just bash until they all die
- Didn't find the goo that useful since the mentioned method makes it easier...
- ....while the green blob that spawns a puddle is annoying because when you kill it, you're basically in the AOE. I think it would have been nice if the puddle didn't spawn on you.
- Is it normal that the main menu has a music, but when I start the game, it doesn't play anymore?

Aside that, not bad! Felt satisfying to kill them :)

Aggroing all of the enemies together and then bashing them all is one of the most satisfying things ever.

The hit sound is a bit loud though. Minor issue.

There's some issues with keys being stuck but otherwise was fun trapping the goo in their own muck and putting them on the blockchain!

I know better understand how blackchain technology can better the world through decentralization. You take a central point and smash it into millions of little points! Thank you for helping me wrap my mind around this concept!

Good job on the game. Played super smooth and the splat was super satisfying!

I like the minimal pixel art and 8 bit sounds. Really cool and fun game! Nothing like beating slimes with a block on a chain!

I made it to wave six but I remember playing this game before I finished my game and I did much better.  lol!  Nice job!!

This is a cool game I like the sprites. I wish Eli had a fullsize adventure/beatemup game. I wonder what type of shenanigans he would get up to and what environments he would traverse. also I am having problems with the up arrow sticking

I like this game, my favourite thing to do is round all the slimes up and shoot one or two slime goo puddles as the weapon deals splash damage.

Thoroughly enjoyed this.  I like the pace of it.  Great characters too.

Best use of Blockchain technology I've ever seen.