Avoid the bullets!
Submitted by Chadderbox — 19 hours, 23 minutes before the deadline
Add to collection 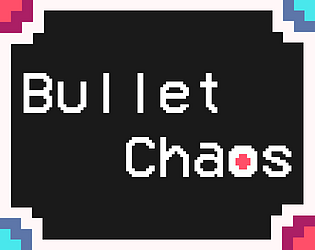 In what way does your game fit the theme?
Wow, such bullet, much chaos.

Did you write all the code yourself and made all the assets from scratch?
Yes.

At first it seemed almost boring. But then I tried to find the most creative ways to let enemies kill eachother!

Even though you've run out of time, this game is better polished than most games I've seen here! I will probably return sometime.

That was chaotic alright! 18:40 Bullet Chaos

Submitted
Time To Wake Up
LikeReply
NotLivingPoolSubmitted97 days ago (1 edit)

Awesome game, was really fun to play. Simple but really quite fun. I like the factor of very little being random, so that everything seemed like it was caused by me, so seemingly could be orderly but still chaotic nonetheless. I liked the torus shaped map, it made me feel not trapped by the map, but by my own decisions from the past. The controls are rigid, maybe a little slow so it feels like I have not enough control, but the linear paths of the controls give back the sense of having control, even though  may not look that visually appealing. One thing that bothered me is the particles, since they were the same opacity as all the dangerous stuff it made me think that they were dangerous too, so turning the opacity down would be better for gameplay and less confusing.  Really liked your game!

Would also appreciate it if you play and rate ours! Thanks.

love everything about this despite the so called disaster that was mention, just that you may to use post processing to give improve the graphics like a bit of blooming or more types of enemies like a smaller guy that shoots small bullet

Yeah, I reckon post-processing could make this look a bit better.

also if you had a chance could you try my game

I love your game, a lot of another devs make game like your, but you are the one that achieve to make a game that is tense and feel truly chaotic. A good feeling and fun with a simple concept !

And you make it in two days too :P

I like the music and graphics but it would be cool to have a way to fight back against the enemies.

Submitted
Let there be zombies
LikeReply
ZerschnetzloarSubmitted99 days ago(+1)

I enjoyed the music and the simple art style and gameplay a lot. There could be a bit more content to make the game more exciting. But the core of the game is awesome. Good job, keep going!

The music grew on me and I ended up vibing to it. Simple yet fun gameplay. Could use some more content. Good job!

Submitted
Legend of the Chaos Mage
LikeReply
HuntExe101 days ago(+1)

Fun. but simple game. Think it would be cool if you continue working on the game, to add things like upgrades or better graphics. All around fun and addicting game.

The enemy cannot shoot before they are 120% over the screen bounds. You may be killed by screen wrapping bullets however.

Yeah might be that, still pretty anoying getting killed by something you cant even see

You can see them.

i just wish the player could shoot as well

That is part of the gameplay and also trying to tie into the theme. If you could shoot to control things then it would not be very chaotic.

I thought this was a good game overall. I like how it's slower-paced than a lot of other bullet hells, and I do enjoy the music, did you make it? if so props.

Yeah I made the music, I didn't think it was too good personally, but maybe it just isn't my style.

great interpretetion of the theme , but i'd also wish that the PLAYER can also Shoot but anways the game was fun neither way ! [ mind if you rated my game hint* hint* ]