Wave Based Survival on a Small Planet
Submitted by Fxy (@fxydev), DefinitelyNotAShark (@kneznekoff) — 7 hours, 1 second before the deadline
Add to collection 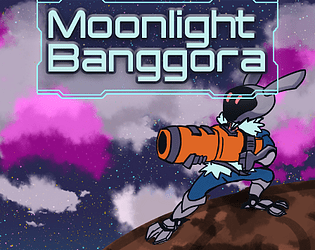 I liked the characters in the game, and the effects are neat. The game feels like a twin-stick shooter so it's a shame you're only able to shoot to the movement direction. Also the small fov gives the game unnecessary difficulty that could be achieved in a different way! But these are obviously just my thoughts and good job on making the game during a jam!

Added to my collection of preferred games from this Jam.  Can see this being lots of fun.  Like the graphics.  Sounds a little basic but OK.  Fun gameplay!  Definitely one I will come back to and spend a but more time with :)

I'd really appreciate it if you would take the time to play my entry (first entry in a GameJam) and rate it :)

Really good game. Made it to lvl 36. That speed boost when killing enemies gets really funny :D I also managed to jump really high in the air. I guess some colliders bugged out and threw me up :D

Sound is ok. Graphics are really nice. I don't know why I'm a rabbid in space shooting killer carrots, but why not :D The idea with running on the surface of a small (mini) planet is the same I used in my game, but I sticked to the 2D world.

However, I have some points on how to improve your game if you continue to work on it, which I would recommend.

Anyway, I really enjoyed your game or I would not have played to lvl 36 :D

I would really appreciate it, if you play and rate my game too.

I played your game the other day, definitely my favorite of the jam so I'm glad you came around to offer feedback on mine and reach such a high score. Your feedback is definitely noted.

That's nice to hear that my game is your favorite (so far).

I would have rated your game earlier if you had left a comment, because I'm always returning the favor ;)

My high score just got limited by the amount of killer carrots because I was almost instantly dead in level 36 because they spawned really bad :D But every game has to end eventually.

Ah, good to know that that's essentially the softcap for that planet's size. I'll work on designing with that in mind, thank you for feedback again.

That was really cool :) ! Well done !
The controls were smooth, and the sound effects awesome ! And of course the rabbit player character was neat ^^ Keep it up !

Its a fun game. I liked the music and sound effects. But maybe make the camera free moving cuz when I move down I find myself getting hit by the enemy without me having a chance to react. I like it still though :).

Hi men, nice and fun game, in my opinion the player have much healt..

I like the concept of running around on such a small planet and I love your character :D