BTP jam game Defend your planet from the ennemi's spaceship
Submitted by A Way To Die (@awaytodie1) — 23 hours, 11 minutes before the deadline
Add to collection

Submitted
Little Planet: the early years.
LikeReply
A Way To DieDeveloper2 years ago

This is a really good game! Its well polished and has simple but fun mechanics. The theme is integrated nicely and the sounds+music are super juicy. The only critique that I have is that the bullets for the towers look a little bland also the game idea lacks a bit of uniqueness so maybe add a unique mechanic or something like that. Overall I give it a 5/5 of course this does not mean it was perfect no games are perfect.

Submitted
Tiny Invasion
LikeReply
A Way To DieDeveloper2 years ago(+1)

thank you very much ! yes i'm thinking of continuing the game and if yes i'll be adding new unique mechanic and exploiting more the planet with something like turret can only shoot on ennemi in one side

Really well made game. Good sfx and fun to play. It was acctually really relaxing to play as well. In a full game there coul'd be other kinds of towers to place that all don't just follow a linear progression. That would add another layer of tactics to the gameplay. At the moment it feels a bit like a mix of a tower defence game and an idle game. If the choice of towers presented a choice to the player it would make it a fully fledged tower defence game. Maybe a slight enemy variety could help too, but that would be more of a last thought.

The music was also really good, tho i already know that fatal knows his shit.

Overall the game was really good. Good luck further on.

Submitted
Planetary grapple
LikeReply
A Way To DieDeveloper2 years ago

Awesome work man :) ! After watching your making of video I was looking forward to trying this out !
Visuals are simple and nice and the music/sound effects are really neat. I didn't feel like there was that much strategy involved for the gameplay, it was mostly just wait until I have enough coins and place a turret, so I got to wave 8 or so I believe without any real challenge. But still, it was a pretty relaxing experience, one that fits very nicely with the theme of the jam.
So yeah all in all well done and keep it up :) !

Submitted
Tiny Planets
LikeReply
A Way To DieDeveloper2 years ago

thank you for you feedback ! It's nice that you liked the game and yes there's not that much strategy at the beginning but when you reach the wave 15 if you don't have a good strategy you can't continue

You did an amazing job for your first game jam :D very polished and quite fun

Classical pixel graphics style with the 8-bit audio. Also Nice the tower defense type game mode which makes me reminds many faviorates game in my childhood. Very nice UI design and the HP bar. One recommendation for you is that you can improve your tower difference not most of the towers are shoot projectiles. That's would be looks diversity in your universe game. But it cannot deny you have build the based game and gets high rates.

Submitted
AFTER EARTH
LikeReply
A Way To DieDeveloper2 years ago

thank you for testing and rating so much ! yes the turret all shoot projectile and maybe after the jam i'll see to continue the game and add some new turret that interact differently for more diversity and with that, new wave, new ennemi and improving the overall

your game was very much fun to play and it was addictive too. The start screen was also cool and the art was cool too.

Submitted
THE MINI PLANET
LikeReply
A Way To DieDeveloper2 years ago

Fun little tower defense! Although I personally feel like it's a bit too easy, even in speed 3. I got to wave 21 but then all the turrets started shooting at the right of the screen and couldn't proceed to the next wave. But overall, good job!

Submitted
Colony Defender
LikeReply
A Way To DieDeveloper2 years ago(+1)

thank you for the comment :) yes its the major bug of the game so bad snif but the game is supposed to be not hard but wont pass in speed 3 after the wave 20 if you're not prepared

Managed to get to wave 20 before dying. I liked the music and sound effects. Cool game!

Submitted
For The Emperor
LikeReply
A Way To DieDeveloper2 years ago

I love this! Took me a few tries but I finished it! The visuals and sounds are excellent. The gameplay in a weird way was relaxing, which was pretty nice to see for a game of this type.

I do wish there were a few more types of turrets, and the game did get stuck one time while I was playing (wave 3, turrets just kept shooting offscreen to the right). Aside from that, excellent work!

Submitted
Pluto vs. the Worlds
LikeReply
A Way To DieDeveloper2 years ago

hey, thank you soo much for your comment :) i really appreciate it nice that you like my game !

yes i noticed this bug when the turret shoot for nothing, will try to fix it ! and yes maybe if I have the motivation i'll continue the game after the jam and add waves/turrets to the game

This is a really cool little game. But at stage 27-29 I lost some life even though every turret was maxed. 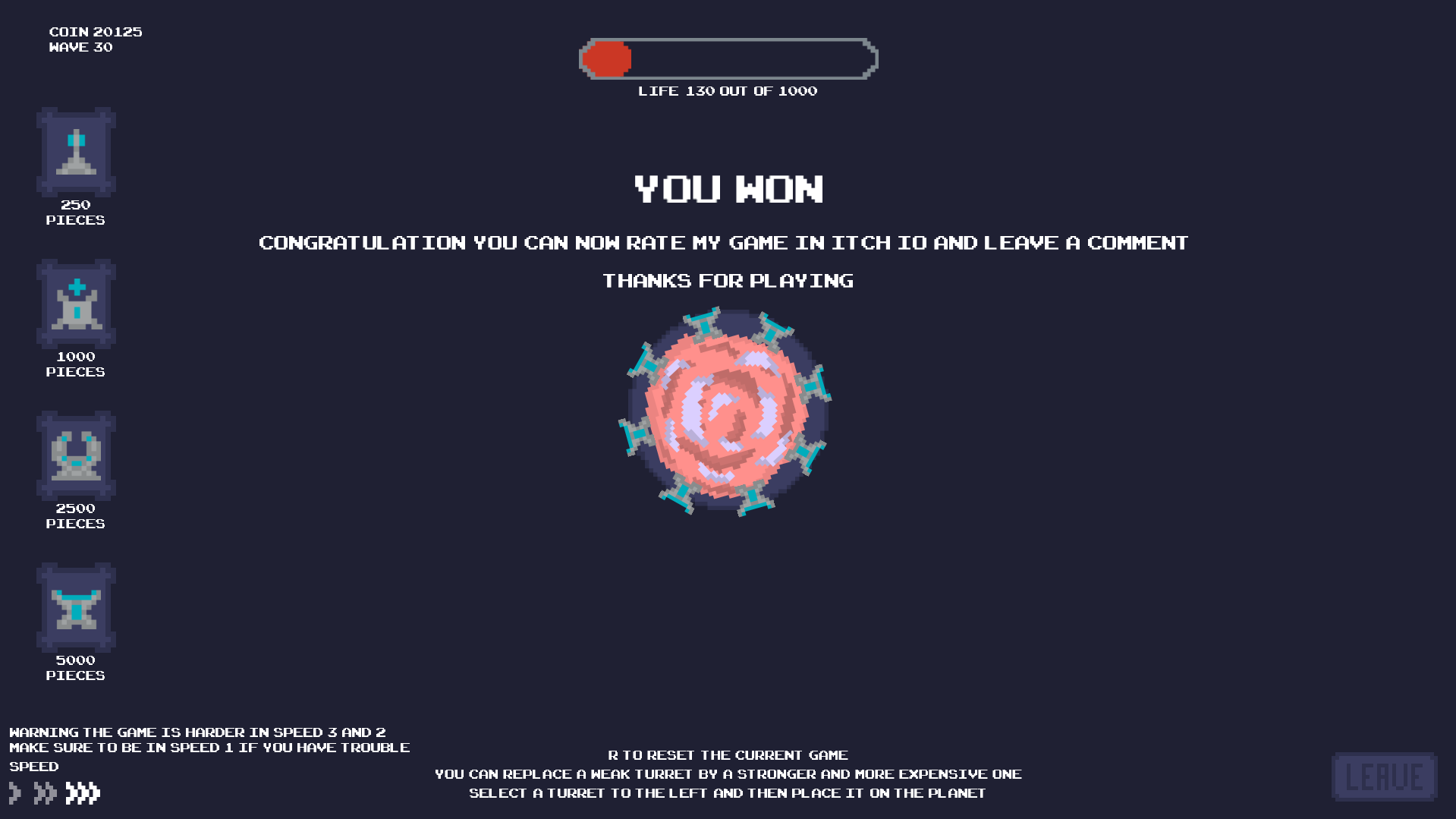 Submitted
Mini Colonizer
LikeReply
A Way To DieDeveloper2 years ago(+1)

thanks for playing, nice that you liked it ! yes i know, the game is a bit random at the end if you're still in speed 3 but in speed 1 its ok most of the time you wont or just a little bit lose life. its somethings that i would have to fix when the jam will end

This is a really cool and relaxing game! All colors, sounds, particles match perfectly with the style. Waves are challenging but fair once you get powerful upgrades.

Be sure to rate my game and leave some feedback too :)
https://itch.io/jam/blackthornprodgamejam2/rate/379272

Submitted
Pretty Planets
LikeReply
A Way To DieDeveloper2 years ago

Hey there, sorry it took me so long to get around to playing your game, was working with my team for the EC jam. I won the game (made it to wave 30) first time (I had played your previous test versions though) I had maxed out my towers by maybe wave 24-25. Overall I thought it was a great game and I'm glad I could contribute music to it for the jam. One thing I'd recommend you do before the jam is over is make a .zip version of your game ( I have 7-zip but I doubt everyone does.)  Hope my comment helps you out! Thanks for sending me a link to the finished game :D

The game is fun and relaxing and the art and music is nice, but I think the boss on wave 10 is too hard (I played 4 times and lost to it every time)

thank you for the comment !, i'll make it easier, with the right strategy it works but yes the first time wave 10 is hard

I beat wave 10 this time, but died to the second big one. (Also I was on speed 3 last time, so maybe that was why it was so hard)

yes in speed 3 the game is more difficult but by spending money smartly he is beatable (in fact it's a bit like a bug but I did not know where it came from then I added a warning message in game, as you've already seen, I think)