A puzzle game where you draw water from a well to water your plants.
Submitted by Bengad, TomkBen, RonDev, Flame Berry (@TeamFlameBerry) — 7 hours, 6 minutes before the deadline
Add to collection 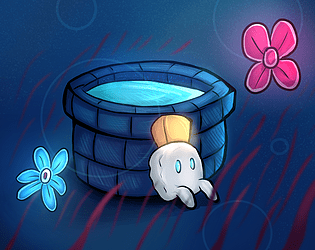 Ranked from 122 ratings. Score is adjusted from raw score by the median number of ratings per game in the jam.

This is a professional masterpiece! Like this so much. 10/10!

This was a mechanically fun, visually appealing puzzle game!

The less water in the well, the more moves you have. This was a core mechanic of the game and related to the theme very well. Nice work!

This game had very beautiful art and pixel art work! I could easily tell what everything was, and the character popped which is always helpful! The only thing here that may have help was a clearer UI when it came to saying how many more steps you had before well overflowed. Once I played the game for a few minutes, I was able to understand it completely, but at first it was a challenge. A remedy to this could have been a better tutorial area to learn the rules of the game.

Puzzle games are always super innovative to me. Especially if they are fun and provide a challenge which yours did. The best part was once you understand the game, you could figure out the rest of the puzzles fairly easy, but there would still be moments where you had to stop and think your route out. Clever!

The game did have a nice music track and had a few sound effects. The overall sound design was simple for the game, which I felt there could have been a little more, to make the game just that much more juicy!

The game had me overflowing with joy while playing due to how well the mechanics and visuals were polished. The sound design could have been slightly improved which would have had a drastic impact. The game does take a minute or two to get use to the rules of it's world, which a better introduction stage or tutorial would have resolved this issue completely. Final thought, his was an enjoyable experience, with a lot of content for a 1 week jam project that is worth the playthrough!

I streamed it  here, starts at minute 40:

your stream killed me XD

thanks for the feedback

we understood the tutorial was not clear enough

A lot of cringe worthy video lol I had a lot of fun playing and figuring your game out though. The art was pretty incredible and  you had a lot of levels. I actually played it off stream to finish it completely. The biggest thing that confused me was how level 0 was there and it was highlighted. I was instantly drawn to go there! xD

OVERFLOW is up now! A puzzle game where you draw water from a well to water your plants Play now for free https://flame-berry.itch.io/overflow-official

Very unique and enjoyable game, I really liked it!

Submitted
Maze of the Neglected Triangle
LikeReply
FreludeSubmitted1 year ago

I need sometime to understand how it works, but once I did it was fun.
Great entry, well done.

Wow, bro! Such a great game! Sounds and visuals are so calmly and beautiful, that I'd played this game twice! Well done!

Gorgeous game. Level design is top notch and the graphics and sounds fit the overall mood of the game well. I would have liked a tutorial though, as it took some time to grasp the mechanics of the game. Well done!

Such a great game! I absolutely love the visual, music and the calm, relaxing atmosphere. The concept is so genius and the puzzle design is amazing!

Definitely one of the best game in this jam! Fantastic job!

Nothing much more to say than has already been said below. Really cool entry with smart puzzle design and good progression throughout. High level of polish for a game jam entry. Well done!

A fun game, I really had my head scratching on this one :D

The puzzle design is astounding and feels really complete.

Very clever indeed, well integrated and made me scratch my head a few times to figure the puzzles out. Satisfying to complete, good use of theme, good job.

Submitted
A Brief History of Golf
LikeReply
SaeedPrezSubmitted1 year ago

Great puzzle game. The only thing I missed was an in-game tutorial, as it was a bit confusing in the start. The graphics and audio were minimal, but they were well executed.

Would love to get your feedback on my game as well.

Well done, I had fun playing it.

What a great game! The puzzles were the right level of challenging that I  was able to beat them without ever feeling totally stumped but still had to think through them, and the art and music work together really well! Fantastic job!

This game was so much fun, it took me a minute to fully grasp the mechanic, but that's because I didn't read the instructions XD Loved the gameplay the music was so peaceful and the overall just feel of the game was great. All 5 stars from me, great job!

I had simply put 5 stars for all the categories. Well done, the best one I have seen for the moment. It could be nice to have a little end story when you finished the game. Incredible :o

Amazing game...I loved it, the music is so relaxing...I actually made a puzzle game for this gamejam too...it even has some similar meachanics =) It wold be cool if you could check it out =)

Wow what a very polished game. It feels like you could sell it right now. Puzzles were really well designed, i have to give full 5 stars cuz this is the full package!

What a lovely game. A lot of beautiful work put on in it. At the end my expectations weren't fulfilled unfortunately, but I shouldn't have so much hopes on a gamejam :P

Amazing approach to the theme. It was clearly visible both in gameplay and artstyle, so huge plus on that.

Amazing stuff out there, it surely has some inspirations from 'Baba is You' (artstyle, transitions etc), but there's a lot of unique content too (also inspiring is also important, so no shame for that). Loved how smooth everything was. Background with those beautifully made particles really gave you that calm and dreamy vibe which was awesome. Interaction with the world was well done (you could really see your influence. So basically I have nothing to say out there. Actually the only thing that I considered a bit out of style was this trophy at the end, but apart from that, everything was wonderful.

Definitely a great idea. It would make a very good game on steam (ofc after enhancing). The idea itself is also so well designed, that if you were eager to create any story for this game, it would be really easy.

Sounds are really well fitted (maybe you could randomize the pitch by little, as we hear the same sounds over and over and some variety might do some good). Music was great and it gave a wonderful calm climate to the game. If you could just make it a little bit blendable between each loop, as I could clearly notice when music was starting over and at some point of a game it made me consider it as mistake (and mistakes are good to avoid I believe :P).

Pretty easy to understand (tho it's a bit confusing at the beginning (maybe some even more tutorial-like level at the beginning? Dunno really) and with a lot of potential to build upon. Also quite entertaining, I had fun with all of the puzzles.

It was all great. You really led the player well (All next puzzles were explaining the next ones very well). Game felt alive and it was wholesome, to one point :P Maybe it's just me, but I felt a bit unsatisfied with finishing the last level (it was even outlined in a different style, so by default I've understood that it will be special!) and well it was, it had one-more-water flower out there, but I wish there was something else (maybe 'choose level' scene would have a different design' or I would be taken to credits (even that would give me some kind of satisfaction), but I didn't get that, and I tried doing the last level like 3 times as I thought that maybe I've missed something.

For that I had to lower my design score by 1, so you won't get all 5 from me this time :P was close tho, unfortunately endings are really important as player stays with what he felt at the ending.

Wonderful game anyway, and big thanks for creating it!

That's a high game design, so many ratings already and well deserved I think!
I was really impressed by the level design as well.

And the music, just beautiful and perfect for that type of game!

Really enjoyed this one. At first the visuals made me think it was just going to copy Baba Is You, but it has its own identity once you get into it. The puzzles in the last third were really good and satisfying. I could definitely imagine this one being expanded on. Good job.