Submitted by Lana Lux (@wtflanalux) — 2 hours, 37 minutes before the deadline
Add to collection 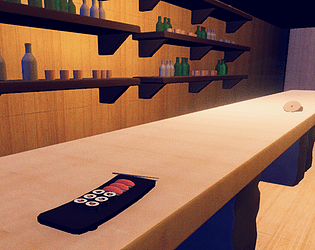 I enjoyed playing the game, the atmosphere is really nice with it's oriental Kill Bill vibe and I like that the bad guys are emissive, or are they actually the good guys since we are the ones crashing their dance party? :)

The combat was good but a bit too easy, it was nice with the chain reaction it caused with the other close by AI's started to help their friend as it made it abit more challenging. The only issues I had was with the AI getting stuck in the spawn area so had to replay the game a couple of times when they stopped rejoining the party, and they lost their target when i was jumping.

The game was fun and rather addictive while they kept spawning, so just wanted to down a few more and a few more.

The login menu looks very good and professional, and could just update the background image with one including the dancing emissives like in the screenshots instead of the T-pose character.

Nice visuals. I somehow really like the main menu design, the signup and login page are very clean and the colors fit well. I also like that the characters roam around and don't just stand in place. My only critique is that when you die, the game over menu with the buttons is shown immediately and I was still spamming my mouse click, unluckily my mouse was over the quit button. Maybe adding a small delay before the buttons are shown, such that I can realize I died and stop spamming.

Didn't last long they ganged up on me pretty quickly ;(