Submitted by dusglbr — 14 hours, 37 minutes before the deadline
Add to collection 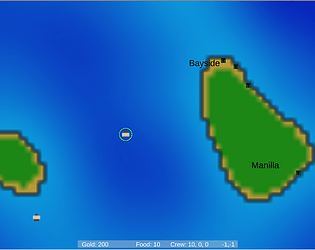 Nice concept i dig being a pirate in a management game. It would be nice to have more dynamics like things that would make me feel more in control of a ship rather than a cursor, like ocean currents that make slow you down or make you faster.
Another thing i think would benefit the game is that ships should try to avoid you, also you could add a collision system for the ships so you can even add a damage meter that require gold for repairs.
I hope you find the feedback useful.

Menus overlap themselves, and maybe wish there was more interaction  on looting rather than just pressing spacebar, which is a also a bit hard to press since it requires timing and the loot range is so short, so in short makinig looting more fun would be great

Thanks for the video this was really helpful!

I think you pretty much covered everything in the game. I did end up spending a ton of my demo day getting ready time on saving/loading and it's interesting that it wasn't as important as I thought it'd be. Also this is where your name comes into play, it's used for creating saves.

The next thing I'll work on is probably combat functionality.

I think you'll have a dialogue with the NPC. You can threaten them in which case they'll give you some loot and leave. Then if they choose to fight then you'll have the choice to "autoresolve" where you board and your crews fight it out, or do a ship battle where you fire cannons at each other.

I'll also try to work on UI a little bit and at a minimum make things bigger and fix some of the hotkey issues like esc not leaving the pause menu.