Submitted by Garfybold — 2 days, 20 hours before the deadline
Add to collection 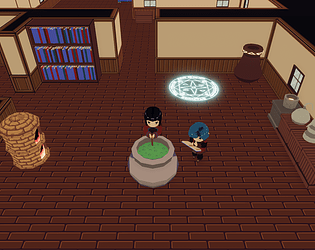 Oops, didn't realise the tutorial was bugged. Should be fixed now.

Was able to open and make a character, but am unable to move or do anything (besides open the debug menu and give myself some levels).  Tried on medium and high settings just in case that was it. I vaguely remember playing this last DD so maybe it has something to do with what/how things are saved?

-Add "Randomize" to the customization screen
-Mouse to rotate would be nice too
-The "talking" sound is horrendous, pls no
-I was playing at 1370x??? - the chat bubble goes out of screen bounds
-I also didn't read any of that shit
-The game was 60% of my CPU through-out on low with windowed resolution with fans screaming
-Changed it to 640x400 to not have it smell like rubber, now I can't start the game (button off screen)

Didn't get to the actual gameplay because of all of the above.

If the game was using a lot of your CPU it's probably because you changed the setting to low or very low. These disable Vsync which lets the game run at a billion FPS.

The dialog sound probably sounds bad because of this.

If the chat bubble is going off screen it's because you used a resolution smaller than what the game will support when I get round to adding graphical settings. I've tried it on 1280x720 and the chat bubble never goes off screen, and that'll probably be the smallest resolution I'll allow in the future.

When you say mouse rotation, I assume you mean rotating the camera, which isn't something I intend on adding. At most I might add the ability to slightly rotate the camera a few degrees before it snaps back to it's original rotation.

-on "high" the game idles at 12%, which is an improvement
-by mouse rotation, I mean that if I'm customizing a character, I want to be able to see it from all sides, which I've now found you can do with the arrow things, but dragging mouse is the first thing I tried
-Here's the bubble getting cut off at 1360x768, it's probably the aspect ratio issue
-The sound is still abyssmal with the better graphics settings -- I don't like the tudududududud garbage

Stop being defensive, I don't care if you fix any of these things or not. I'm just writing the things I've noticed.

-I didn't read any of the intro text, now I'm "stuck" figuring out how the game works, prompts would fix this
-Apparently Q dashes back, but that works about 50% of the time: if I press Q every 0.5 seconds, sometimes it works, sometimes not
-It wasn't obvious that the bottom door was an exit
-Let me be able to toggle running
-The artstyle is nice, but the soft shadows seem to clash with it
-Running on grass makes stone sounds
-The tree collision boxes are clearly too large
-Doesn't seem like there's a reason to rip a plant out and not collect it, in which case, rip-into-inventory makes more sense
-A map would be nice
-Make the 3D prompts Camera space 2D instead
-Let me [Esc] or [E] out of the screens I [E] into

Stopped after running around for a while in the second area. Felt like I was dropped into an ocean of stuff.
With some careful pacing this might work for me.

For me, the game idles at about 2-5% CPU usage. I mean, it's not optimized or anything but my computer isn't exactly amazing either. And an empty Unity project idles at like 1-2% CPU usage.

Obviously at some point I'll look into optimizing it, but I've had no performance problems on my computer which was only a mid range machine a good 4-5 years ago.

As for being stuck, not much I can do about that. If you ignore everything, including the tutorial what am I suppose to do? The game is still obviously largely unfinished, but all the important systems and the general objective of the game is explained. There is even a journal which explains what you need to do incase you forgot, but if you're not reading the intro you probably wont even know how to access that.

Most exits should have a big blue arrow that appears when you get near them because sometimes it isn't obvious something is an exit. If an exit doesn't have one, it's probably just something I forgot to add.

The same applies to being able to close menus by pressing ESC. Most menus can be exited by pressing ESC but there is a few I probably forgot because there is just that many menus now and it's hard to keep track of everything.

Being able to evade with Q is an old feature that I haven't looked at for a while. Either I'm going to look at and fix it at some point, or I'm going to remove it.

I can add a run toggle easily enough.

Footstep sounds are just a minor feature that's a major pain to implement. At some point I might look more into it, but for now it's just something so small it's not really worth the effort.

Plants flying everywhere when you harvest them is more fun than them just going straight to your inventory.

I'll add a map at some point. The world is still unfinished and it seems pointless to try and map it out when I'll have to constantly go back and make changes to it.