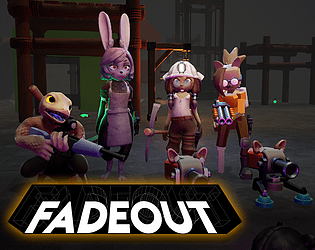 Played for a while, it's pretty cool here is whats what:

-Dunno if framerate is uncapped or the game is heavy, be very careful with dynamic lights, I bet that a lot of times you can just use stationary or just ones that don't cast shadows, very careful with their radius and overlap between them too!

-Your door is fucked fam, seems like you are using a timeline "play from start/reverse from end", playing and reversing like normal maybe works just fine

-A button to change shoulder side while aiming pretty please, could be Mouse3? Kinda have the faint memory a game did that and it was fine

-On the topic of third person control, it looks like you want to make a game with a jolly and cute main character moving around graciously and whatnot, I've been seeing the progress in the game for a while, seems like that's what you want to do and that's cool but I don't really see why the game is third person.

Like, for the most part it feels to me that is for its detriment, for examples:

·Character very prominent on screen when aiming with gun and grapple, kinda annoying

·Environment has a lot of tight spaces, lots of camera collisions, kinda annoying

·Quite some verticality going on, bet the game would have lots of it, you look up, camera collides on floor, character very prominent on screen, kinda annoying

And maybe it's me, I'm heavily biased towards first person games because that's what I like to play and it's a point of view I feel very comfortable in but if you are making a third person games you want to work a lot on that camera, maybe add a trigger on start of tunnel sections so the camera is way closer, very on the shoulder on tight corridors, maybe do that too when aiming. Fade characters/meshes with a dithered mask if they are in the way of the camera so you don't have it colliding with stuff, etc, there are lots of tricks I bet you can learn to make the player more comfortable with this point of view.

The character itself looks swell, she moves quite graciously and it's rare to see indie games with decent animations, even if she has few right now they look good and feels very weighty with all the physics things, good stuff.

Same with the environment, they look boxy and kinda barren at the moment but the assets have some artstyle going on already. Wood looks fantastic. And there is already a vibe and atmosphere going on which is super nice.

Overall, there is stuff going on, cool shit.

Thank you, there's some stuff in there that is consistent with other feedback that I'm going to be focusing on.
(ADS side swapping for instance)
The door is indeed fucked, its one of the first blueprints I made, sorta forgot about it...
Again thank you for playing, the feedback is very much appreciated, and I'll be working on it more!

The stealth seems wildly stacked against the player. You have to get within a meter to stand a chance, but enemies will pick you up if they catch a small glimpse or if a physics bomb accidentally rolls against them.

Shows promise, but needs more for the player to interact with

very true! it might have been too rocky to even release this demo as is
The gameplay has a lot of room to grow

It's never too rocky to release a demo, that's what demos are for!